From the Archive: a large pattern violin by Andrea Amati, Cremona, 1572 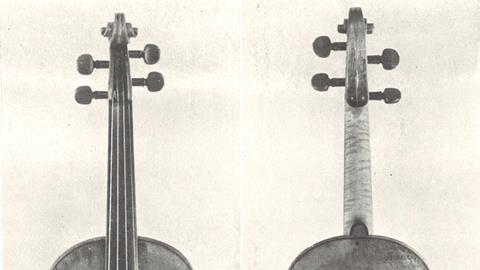 This illustration of a 1572 violin by Andrea Amati was published in The Strad, March 1928. The following text is extracted from an article accompanying the photographs:

This instrument by Andrea Amati is perhaps unique, it being the only large violin by the maker that is known to me.

It is recorded that Andrea supplied twelve large-pattern violins, together with a similar number of smaller-sized ones for the private orchestra of Charles IX of France, but it is curious that writers on the violin seem to generally only know of the survival of small-form examples.

The charming instrument depicted in this issue has a body length of 13 5/6 inches, that being the identical measurement I have found on the larger violins of Antonio and Girolamo Amati. The width of the lower bouts of the Andrea is 7 7/8 inches and the upper extreme width is about 6 7/16.

In the violin’s various features we are reminded of older instruments; the back is of much flatter modelling than the table, the comparative width of the waist is greater than was generally the case in Cremona, a hundred years later, whilst the distance between the upper terminals of the soundholes is much more than was the custom afterwards.

Its tone has a quality and charm which come to one like a legacy from the remote youth of instrumental music. Volume is present equal to that of the tone of some of the ‘Grand Amatis’ of a later generation.

The wood shows its great age, and at exposed places has an extraordinary depth of colour, but its healthy and sound nature is obvious, as the tone also tells us.