From the Archive: a Gennaro Gagliano violin 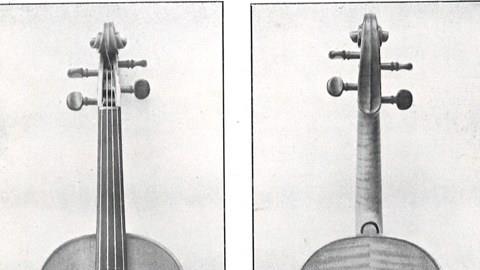 This illustration of a Gennaro Gagliano violin was published in The Strad, September 1915. The following text is extracted from the article accompanying the photographs:

The names of Alexander, and his eldest son Niccolo, were familiar amongst our British fiddlers long before that of Gennaro came to the fore. Today, in the opinion of most judges, he is held to be the finest maker of the whole tribe. He adopted a better form of instrument, his scrolls have more character, and his varnish is generally much better in appearance and texture than that commonly employed by his relatives.

At his best the fiddles are compact and well designed, and are generally fourteen inches long. The resemblance to Stradivarius’s instruments is marked in almost every feature. He seems to have designed nearly all his productions on the teachings of the great Cremonese, and rarely if ever did he materially deviate from them.

The violin here illustrated is a first-rate and thoroughly typical example of its maker. It possesses a round, mellow tone of great purity and character. The varnish is plentiful, and of a reddish amber tint. The soundholes are admirably cut, and the whole instrument is in fine preservation. According to the label it dates from the year 1765. The finish is clean and the purfling well done. The belly is of medium grain pine and the back and sides handsome.