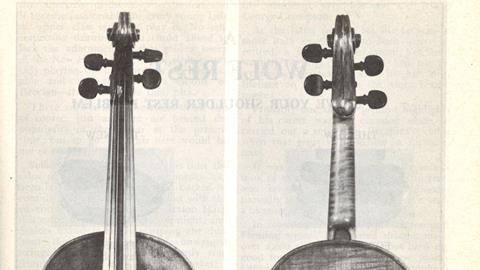 This illustration of a viola by Jacob Craske was published in The Strad, April 1976. The following text is extracted from the article accompanying the photographs:

The recent record price of £1,300 obtained at Philips for a 15 5/8' viola by George Craske circa 1680 has tended to throw something of a spotlight on this prolific English maker.

Few of Craske's instruments are really renowned for any degree of good tone, for the graduation of his tables leaves much to be desired, being in general far too thick, allowing far too little tonal response. Yet every one of his instruments that I have handled, without exception, showed the most accurate workmanship and clever attention to detail.

It is an accepted fact that no maker ever produced so many stringed instruments by his own hand as did George Craske. In addition to supplying a great number of instruments to dealers during his lifetime, he is reputed to have also made no less than 2,050 violins, 300 violas, 250 celli and 20 double basses.

Now may we indulge in a little simple arithmetic? It is of course virtually impossible accurately to estimate the time taken to make any specific instrument from scratch to full completion, but for the sake of example let us assume that on average a violin took him a week to complete, a viola a little longer, a cello some ten days, and a double bass some two weeks. Even so, as any maker will tell you, this is really 'going some'.

This would add up to the following man-hours when based on his known output, and whilst it is entirely hypothetical it must surely be of interest:

The working period of George Craske appears to have commenced around 1826 at about the age of thirty. Now if we assume that he retired to Bath around the age of 85 this would give him a total working life on his account of some 55 years or 2860 weeks. On this assumption our estimate would leave the poor man with but 20 weeks in the whole of his career in which to be ill or take a holiday or move, which he obviously did several times.