From the Archive: a cello by Edmund Aireton, London c.1790 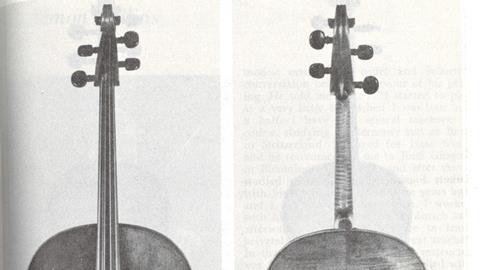 This illustration of a cello by Edmund Aireton was published in The Strad, January 1978. The following text is extracted from the article accompanying the photographs:

Edmund Aireton was born in 1727 and died in 1807. He worked for Peter Walmsley who had his workshop at 'Ye Golden Harp', Piccadilly, London and thereafter continued on his own nearby in Piccadilly. His father, also named Edmund Aireton, had worked for Peter Walmsley, and was a noted organist, and is reputed to have stood in on occasions for Handel at Westminster Abbey.

The violincello now illustrated, circa 1790, is of the Amati pattern and measures 29 1/16 inches in length of body; 13 inches top bouts; 17 inches bottom bouts. The table of pine, is, of somewhat irregular broad grain, narrowing slightly towards the flanks. Back of maple in two pieces of narrow figure and the small wing at the bottom left side is original.