From the Archive: a cello by Charles Frank Langonet, London 1920 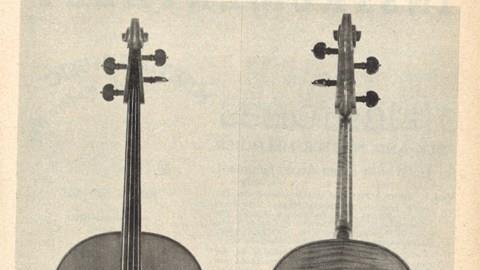 This illustration of a cello by Charles Frank Langonet was published in The Strad, April 1961. The following text is extracted from the article accompanying the photographs:

The Langonets have been violin makers since the beginning of the 18th century. The three generations of the branch of the family living in London have all produced fine instruments. Their work, however, is relatively unknown as they were not prolific makers, at least under their own name, and in the case of Charles Francois Langonet (1860-1929) nearly the whole of his working life was spent in the service of one firm, Messrs. William E. Hill & Sons of New Bond Street.

The same applies, but in a lesser degree, to the work of his son Charles Frank Langonet, born in London in 1888. He served his apprenticeship in France with Justin and Emile Audinot at Mirecourt. In 1905 he returned to England and joined the firm of William E. Hill & Sons where he remained for 38 years. At one time three generations of the Langonet family were working at the same time for the famous firm: Charles Frank’s father, Charles Francois who worked there for 48 years and Alfred Charles (son of Charles Frank) who served his apprenticeship at the Hill workshop under his father.

The very handsome cello illustrated was made in 1920 and is based on a particularly fine G.B. Grancino. It has been very carefully used and today, although it has been played for nearly 30 years, it looks as if it has only just left the maker.

The knowledge acquired over many years through the restoration of master instruments is evident in the construction of this cello and tonally it reflects the experience gained in the ‘mating’ and selection of wood. The first impression on seeing it is that it is a fine example of French workmanship: handsome wood, beautiful finish and a general air of elegance and nobility.