From the archive: a 1755 Guadagnini 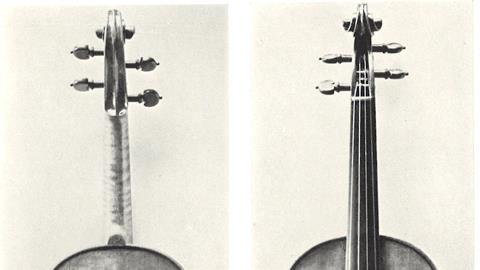 This 1755 Guadagnini was featured in the May 1935 issue of The Strad, accompanied by the following text:

'The particular violin which is illustrated in this issue enjoys the distinction of having been chosen by a well-known American violinist in preference to a Stradivari which was offered at the same price, his choice falling on the Guadagnini on account of its remarkably fresh condition and wonderful tonal qualities.

This violin dates from Milan, 1755, and has the maker's original label. Mr Nathan E. Posner, of Brooklyn, New York, its present owner, has kindly furnished us with the particulars from Messrs. W.E. Hill and Sons' certificate. The instrument measures 13 15/16 inches in the body; lower bouts 8 1/8 inches; upper bouts 6 5/8 inches; lower ribs 1 1/4 inches gradually decreasing to 1 1/8 inches at the upper part. The varnish is orange-red and the violin is described as being in excellent condition and a typical example of the maker's Milanese period.

Joannes Baptista was particularly happy in the selection of his wood, it generally being of the handsomest kind. It will be seen that Mr. Posner's violin has a one-piece back, this is unusual as they are generally jointed, the markings being very regular.

Instruments dating from the period when he worked at Milan are generally considered to be the best, with those he made at Turin following next in merit. One interesting point that should be noted when considering the difference in the productions of these two periods is the treatment of the sound-holes. In the Milanese instruments the openings at the lower parts are cut considerably more oval than in later instruments made in Turin.'