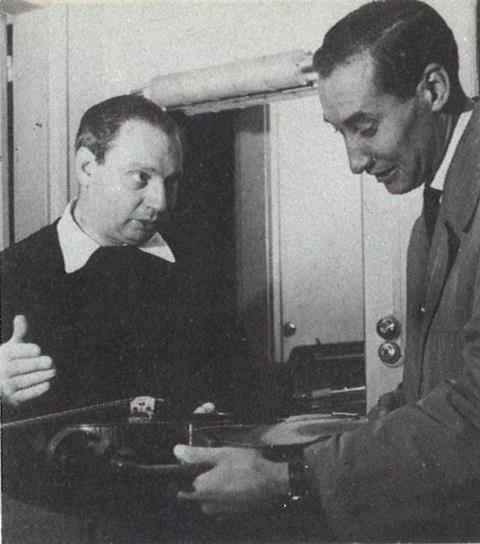 French violin expert and luthier Étienne Vatelot died on 13 July at the age of 87. In a career that spanned almost eight decades, he became a world-renowned expert on stringed instruments and bows, serving as president of the French Association of String Instrument and Bow Makers, publishing books and founding a lutherie competition in Paris. His regular clients included some of the most famous string players of the 20th and 21st centuries, including Yehudi Menuhin, Arthur Grumiaux, Isaac Stern (pictured with Vatelot c.1965), Mistlav Rostropovitch, Yo-Yo Ma, Ivry Gitlis and Anne-Sophie Mutter. Among numerous honours, Vatelot was awarded France’s Légion d’Honneur and National Order of Merit.

Born in 1925 in Provins, northern France, Vatelor began working with his father, luthier Marcel Vatelot, in Paris at the age of 18. ‘My father knew most of the composers of his era – Ravel, d’Indy, Saint-Saëns, Ysaÿe and many others,’ he said in a 1988 interview with The Strad. ‘I must say that Ravel had no appetite while Ysaÿe certainly did!’

After serving in the Second World War, Vatelot studied lutherie in Mirecourt with Ame?de?e Dieudonne?, and then in Paris with Victor Quénoil, who specialised in restoration. In 1949 he won a prize at The Hague’s International String Instrument Competition. He took over the running of the family business in 1959 at the age of 34.

In 1970 Vatelot founded a school of violin making in Mirecourt. Between 1976 and 1977 he published Les archets français, a two-volume work that has become one of the seminal texts on French bow makers. From 1980 to 1997, he was president of France’s Society for the Encouragement of Artistic Professions. He was also a sought-after lecturer on lutherie, and taught instrument making at his workshop.

In 1986 he convinced Yehudi Menuhin to give up playing the 1714 ‘Soil’ Stradivari, which was subsequently purchased by Itzhak Perlman. He also brought the 1711 ‘Duport’ Stradivari cello to the attention of Mstislav Rostropovich, who played it from 1974 until his death in 2007. In 1998 Vatelot allowed luthier Jean-Jacques Rampal to take over the running of the business, henceforth called ‘Vatelot–Rampal’.

‘The better you know a musician and how he plays, the better you can help him,’ he said in 1988. ‘Because, above all, you must not work against the instrumentalist’s personality. Even in choosing an instrument, the personality of the performer is all-important. Isaac Stern, for example, would never have been happy with a Stradivarius; on the other hand Oistrakh would never have preferred a “del Gesù” to a Strad. In a way it’s like a marriage – the two have to complement each other.’

On the matter of appraisal, he gave this advice: ‘The basic rule for me is to start from scratch. Don’t take anything for granted, and don’t let the declared or assumed value of the instrument influence you. I always try to ignore the labels.’