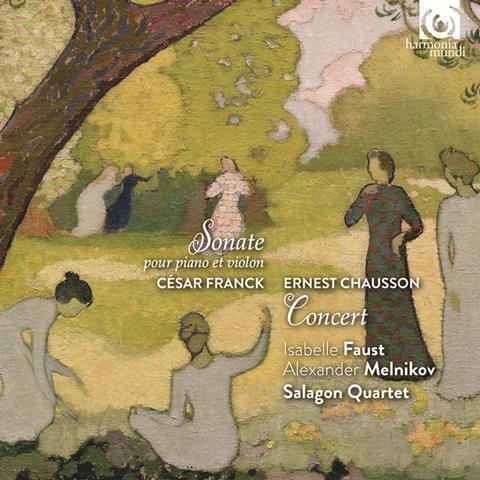 With Isabelle Faust, one can never take anything for granted and I was immediately struck here by the sound of her 1710 ‘Vieuxtemps’ Stradivari, which in the opening movement of Franck’s Sonata appears initially to be experienced as though through a shimmering heat haze, apparently positioned well behind Alexander Melnikov’s velvet-toned c.1885 Érard piano. As the dynamic level swells and recedes, so seemingly does the recorded immediacy of Faust’s violin. The ear quickly adjusts when the emotional potency of the music is so radiantly enhanced by the sonic metaphor, yet when the second movement starts powering away,  the physical impact demanded by Franck’s explosive writing feels strangely muted. Much of the finale is played with sparing vibrato and veiled tone, imparting an air of chaste purity and enhanced mystery. If the Franck is one of the most widely recorded of all Franco–Belgian chamber works, Chausson’s Concert (only partly a question of its unusual scoring) has never progressed much beyond the fringes of the mainstream repertoire. Here, however, the lack of hothouse interpretative hysteria is a revelation, as the predominately autumnal colours of Chausson’s inspiration flower with a captivating naturalness. In the wrong hands it can feel implausibly meandering,  yet played like this, with such acute sensitivity to the music’s prismatic shifts of expression and colour, it emerges as a bona fide masterwork.  JULIAN HAYLOCK