In this extract from our April issue, the crossover start tell us how past injuries have stopped him turning to intense practice to fill the hours 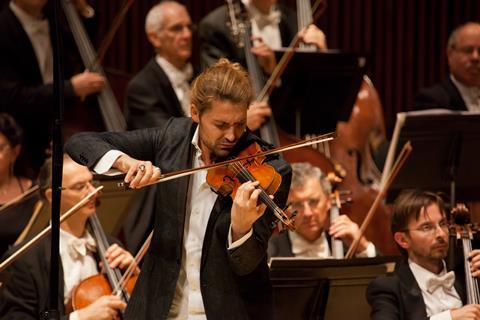 Garrett performing with the Israel Philharmonic and Zubin Mehta in 2013

So how has Garrett coped with the Covid-19 pandemic? This period of forced separation from the stage is surely difficult for an artist so accustomed to performing for large audiences. His Unlimited tour, originally scheduled for 2020, is currently planned for summer and autumn of 2021, with the subsequent tour for his Alive album, itself recorded at the beginning of Europe’s first lockdowns in February and March 2020, following fairly seamlessly in 2022.

‘Over the last 20 years I have become very used to travelling and having musical adventures,’ he says. ‘Therefore, 2020 has been like a sabbatical – not from music, of course, but from performing.’ A herniated disc in 2018, the culmination of many years of ignoring the signs of discomfort, has prevented Garrett from turning to intense practise to fill the hours. ‘There’s nothing more I can do than my two to three hours of practice a day – after that time, my concentration drops,’ he continues. ‘I also learnt from my injury that my body needs breaks. As a younger performer I was extremely ambitious, going to Juilliard and mixing with great violinists, so I started practising more and more. I’d begin, let’s say, at 11am and went through until 4 or 5pm in very long and intense sessions. This led to a lot of tension and positioning problems, starting in my twenties and getting steadily worse, so that around 36 or 37 my fingers started getting numb. I really urge all young musicians to listen to their body. Sometimes, when you’re young and a little bit stupid, you don’t pay attention; but each person is different – some violinists are able to practise for eight hours per day and never have problems, and others might practise for only one hour and still experience difficulties.’