How to replace a quartet member, by the Ébène Quartet

In this extract from The Strad’s February 2020 issue, the players of the Ébène Quartet discuss group chemistry and reveal how they have retained their sound with their newest member, violist Marie Chilemme 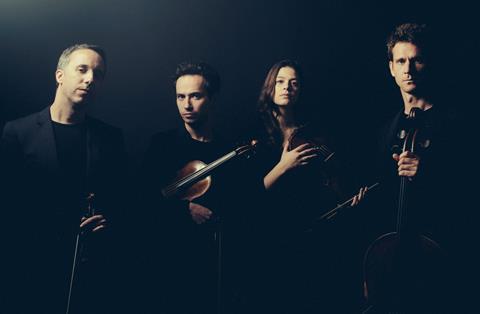 Between January 2002 and December 2003 they had lessons with the Ysaÿe Quartet at the Conservatoire à Rayonnement Régional de Paris. Cellist Raphaël Merlin recalls: ‘An interesting thing we learnt from the Ysaÿe players is that a string quartet can at once be unified, as observed when they’re playing together, and yet not be absolutely in agreement about musical interpretation when they try to put it into words. And indeed, a string quartet should be a place of contradiction. It’s disagreement between the four of us that drives us to make improvements. If you listen to a quartet where everyone agrees, it can be very weak in terms of musical intensity.’

This brings us to the subject of how to replace a quartet member, because the violist featured on the Schubert album is Adrien Boisseau, Mathieu Herzog having vacated the viola chair in 2015 to pursue his conducting. ‘Nobody’s irreplaceable,’ begins violinist Gabriel Le Magadure, carefully, ‘but it’s a big challenge to integrate somebody new. You have to respect all the work that was done with the former member, but on the other hand you have to consider the positive elements now being brought to the table, even if they fundamentally contradict the previous methods; and with Adrien, there was often conflict, but also lots of expression. We probably chose him for what he could do as a soloist more than for what he could do for the group, which was our mistake. We’re proud of the Schubert album, and we’re happy to have shared Eternal Stories (2017), featuring saxophonist Michel Portal, with Adrien. But we also went through a pretty tough crisis.’

So when the mutual parting of ways came in 2017, they knew that they had to audition for the role this time round – but as the hunt for a new violist happened to coincide with Boisseau taking four months out for an injury, the auditionees, booked for short stints, had no idea that they were being tested for a permanent place.

To read the full interview with the Ébène Quartet, in which they discuss their Beethoven around the World tour, their 20th anniversary, and why, for them, disagreement is the driving force of creativity, click here to log in or subscribe