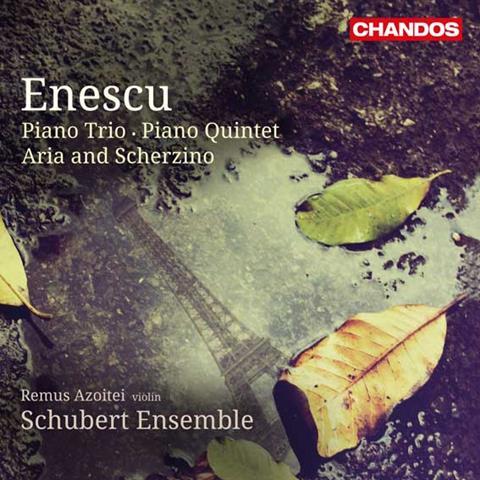 Enescu wrote much music that he never heard or never had published, and manuscripts of long-lost chamber works still appear from time to time. Of the three pieces here, only the filler, the Aria and Scherzino, saw the light of day in his lifetime. The Piano Quintet, composed in 1940, was discovered in the 1960s. It’s a passionate, grandiose work in places, recalling Enescu’s French training but also exhibiting some of the more obviously Romanian colours of his mature works. The players of the Schubert Ensemble give a mature, rounded interpretation that revels in both textual felicities – the delightfully elfin opening to the Vivace, for example – and its rhapsodic emotional journey.

The players have come up with their own version of the troublesome A minor Piano Trio (c.1911–16), based on a reconstruction from the composer’s rather rushed manuscript by Pascal Bentoiu that, according to first violinist Simon Blendis, lacks coherence in places. Again the playing is ardent but never splays under pressure, remaining focused and above all communicative.

There’s luxury casting with the appearance of Romanian-born violinist Remus Azoitei as a subtle and sensitive soloist in the five-minute Aria and Scherzino, delightful miniature showpieces written in c.1908 for a lutherie competition and with an ensemble of string quintet (with bass) and piano. A warmly rounded Potton Hall recording finishes off a highly recommended release.