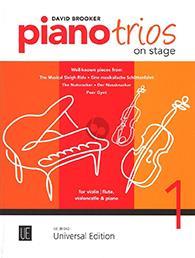 This is the first volume to be published of a pair (the second due later this year), containing well-known tunes in accessible arrangements for piano trio. Leopold Mozart, Tchaikovsky, Grieg and Jingle Bells are featured. The familiar tunes from L. Mozart’s Divertimento in F major (‘A Musical Sleigh Ride’), The Nutcracker and Peer Gynt make an attractive compilation of these child-friendly tunes. Nothing new here, perhaps, in this well-worn path of repertoire choice. But what is new, and extremely welcome, is the attitude to the piano.

One of the tricky things in putting on school concerts or entering pupils for festivals is finding music, notably trios, that may be approached by junior pianists as well as single line instrumentalists, and that sound something other than beginner level. My go-to has always been the wonderful Miniatures by Frank Bridge, for violin, cello and piano. But here the piano part has to be simplified with less complicated chords for anyone other than a pianist of about Grade 6. Yet the string parts are mostly less demanding. So author David Brooker has come to the rescue with this excellent book where the piano writing is compatible with the level of difficulty of the violin/flute and cello parts. The Leopold Mozart could be played by pupils of a Grade 2–3 standard and would be fun for all. The key (as in the original) is F major so tuning issues for the strings perhaps, but generally the melody is satisfactorily shared between the parts, with some moments of echo, giving the piano some bars’ rest, or using one hand at a time.

With The Nutcracker the overall standard is more demanding, not just notes but rhythm too, and here as in Tin Soldiers the cello fingering includes several extensions. The Grandfather’s Dance is splendidly straightforward, and I like the arrangement of the Magic Castle, here in G major, with supportive cello pizzicato. In the Three Pieces from Peer Gynt, the first opens with an editorial suggestion in the violin part to play in second position (C major), followed by a part requiring some dexterity in higher positions. Anitra’s Dance is well arranged between the instruments, and again the piano level matches the other instrumentalists. Finally, Jingle Bells works well, with good dialogue between the strings to make this old war horse as interesting as it can be. Teachers and pupils alike will all find this new publication to be a splendid and useful addition to the early chamber repertoire.