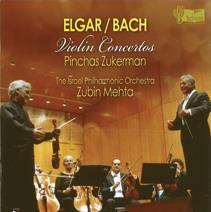 Pinchas Zukerman recorded a notable account of the Elgar Concerto back in 1976 with Daniel Barenboim and the London Philharmonic Orchestra, in particularly fine sound. On this disc, made 30 years later, his contemplative first entry brings with it a degree of rhythmic freedom that becomes increasingly marked as the work progresses. His love and affection for the score are evident in his expansive handling of those moments where Elgar appears to be looking back on life – the central Andante is full of tenderness without the lassitudes we frequently hear.

There are some rather sketchy runs that were played with greater clarity in the studio performance, but technically he is in fine form for the final movement. The weaknesses in this live Tel Aviv concert recording are an orchestral performance that is routine and sound that is too constricted to be recommended in a market already crowded with outstanding performances.

The recording of Bach’s A minor Concerto is derived from a 1986 concert at the same venue. It is a modern and weighty account that will please many, though the heavy stress on the first beat of each bar brings a plodding character to the accompaniment for the central movement. As with the Elgar, the recording could do with more air around the sound.