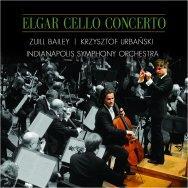 Zuill Bailey radiates warmth and professional poise in this live recording of Elgar’s Concerto, but its sense of immediacy may not be enough to excuse the resultant handful of minor imperfections. Beauty of tone is paramount in Bailey’s performance. His cello is always recorded to the fore, even in passagework. After a ringing, eloquent opening there are some original interpretative touches in the first movement to set against the overuse of portamentos and of the hushed tone high on the D string of Bailey’s 1693 Gofriller, which loses its effect after a while.

The Scherzo is particularly good – whimsical and glittering. Bailey’s semiquavers sparkle here, and his A-string octave leaps in the slow movement up to high, clear, pure notes are exquisite. In the last movement, Bailey’s intonation is slightly below pitch in the climb up to the high A flat.

Krzysztof Urbanski directs with skill, both here and in Smetana’s three tone poems.