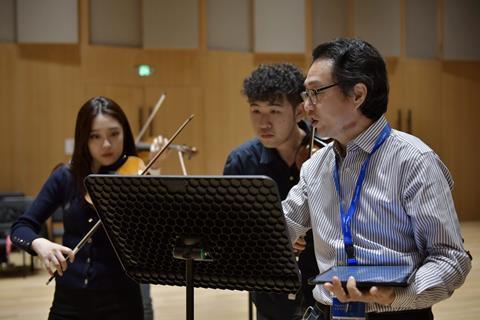 The following extract is from The Strad’s October 2021 issue  feature ‘A New Dawn: Tianjin Juilliard School’. To read it in full, click here  to subscribe and login. The October 2021 digital magazine  and print edition  are on sale now

Over half a million Chinese citizens are enrolled at higher-education institutions in the US and UK alone, and it is an accepted fact that huge numbers of students travel from China to study in the West. But, as Wei explains, TJS is tempting some of these back to China – something he argues is testament to the quality of education on offer. ‘One third of our students are Chinese citizens who have never studied abroad and another third come from countries other than China, but the rest are Chinese people with degrees from top US and European conservatoires. For the first time, these individuals are coming back to China not just to work, but to continue their studies.’ Wei recalls his own studies at the University of Texas at Austin in the 1990s when, he says, most of his fellow international students came from Japan. ‘These days, Japanese students are more likely to stay in Japan, or they get their first degrees in Germany or the UK and return to Japan as postgraduates,’ he says, explaining that he expects Chinese students to follow suit as the country’s teaching infrastructure develops.

The majority of TJS’s ‘international’ students are from other Asian states, but there are a number who were born in the US. Why travel halfway across the world when Juilliard’s New York campus is on your doorstep? ‘I was born in China but moved to the US to study,’ says TJS double bass tutor DaXun Zhang. ‘Sure, I learnt a lot about music, but it was the experience of being so far from home that helped me to grow as a person, and I’ve carried it with me for the rest of my life. There’s no reason an American student shouldn’t also get to experience that.’

Polisi agrees: ‘If they’re interested in seeing the world, they should go to Tianjin to study. They could learn Mandarin there, too, so they’ll be able to enter the ever-growing jobs market in China.’ According to Wei, China is home to more than 70 state-funded orchestras, just over half the number in Germany, but has far greater (relatively speaking) opportunities for younger players. ‘There is less competition here than there is in the West, and orchestral development programmes like Berlin’s Karajan Academy or the New World Symphony in Florida just don’t exist,’ he says. ‘In contrast, a TJS graduate is going to be very well prepared for that audition.’

Read: Violin making schools in China: The way of the future