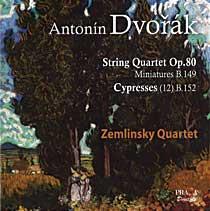 Given that Dvorák produced 15 string quartets in all (including his op.1, with two violas), he might be considered to be disproportionately overlooked by many ensembles. Marking its 20th anniversary this year, the Prague-based Zemlinsky Quartet is hoping to perform as much of the Czech composer’s chamber music for strings as possible.The playing here is nicely burnished. Take the players’ sweet tone in the first movement of no.8 op.80 or, indeed, the light lyricism of almost any of the twelve Cypresses. There’s an apt storytelling quality to the playing, too, as in the quartet’s dumka-inspired slow movement, which is also delicately detailed in its inner parts. What we don’t get a chance to hear in this selection is much bite, and even the fast triplet accompaniment of ‘Death reigns in many a human breast’ (Cypresses) lacks urgency.

Strangely omitted from the booklet notes, the Miniatures (perhaps better known in their arrangement for violin and piano as the Four Romantic Pieces) are played relatively straight, less heart-on-sleeve than one might hope. The recorded sound is transparent and, like the playing, not especially ‘up-front’.