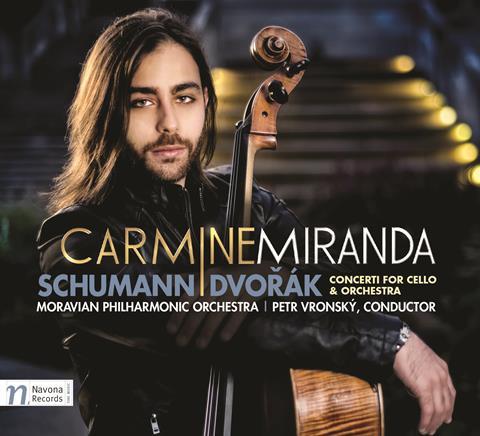 In the fiery climax to the development section of the Dvorák Concerto’s first movement, Carmine Miranda shows himself to be in full command of both instrument and work, even if he makes heavy weather of the double- and triple-stopping that lends the concerto its tenor of heroic struggle. He tends to linger affectedly over the outer movements’ reflective interludes but sets a flowing pulse for the central Adagio and shapes it like an outpouring from one of the composer’s doomed operatic heroines.

Miranda’s approach to the Schumann is still more appealingly rhapsodic. His habit of lurching towards the middle of phrases won’t please everyone but his swingeing up bows and nimble passagework

make a persuasive case for the concerto as one of Schumann’s most edgy and volatile works.

Unfortunately, it is hard to speak of tone, because it seems as though Miranda has a microphone attached almost to the bridge of his instrument and sounds as if he’s playing not in the main hall of the lovely Reduta Theatre in Olomouc, Czech Republic, but in one of its smaller rooms, with the orchestra in a bathroom next door. It is hard to believe that, in concert, the upper strings of the Moravian Philharmonic are so teeth-grindingly acidic, its horns so fuzzy or its brass section borrowed from the local garrison. The wind parts pop in and out of focus, and tune. The impression – not a pleasant one – is amplified on headphones. Approach with caution.