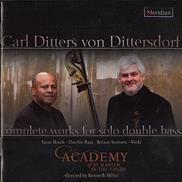 Leon Bosch’s accounts of Dittersdorf’s two solo concertos abound in personality, imagination, warmth and humanity. His assured virtuosity makes light of the extreme technical challenges, particularly in the finale of the smaller-scale Second Concerto, in Sperger’s cadenzas, and in the high-register double-stopping, harmonics and bravura arpeggio passages of the First Concerto’s opening Allegro. His expressive, cantabile interpretations of the slow movements are equally persuasive, notably the Adagio of no.1, in which he is especially sensitive to detail of phrasing, dynamic contrast and timbre. He receives exemplary support throughout both from his Academy colleagues and Meridian’s production team.

Violist Robert Smissen joins Bosch as a soloist in Dittersdorf’s Sinfonia concertante, a four-movement work of striking textural variety. They complement each other well in some attractive dialogue, particularly in the menuetto’s trio and in the expressive central Andantino, in which Bosch plays an elaborate obbligato to Smissen’s melody (with the orchestral violins).

In the Duetto, recorded in a more expansive church acoustic, Smissen is predominant, and not always spot-on in terms of intonation. Bosch largely accompanies with sensitivity, but he is given more prominence in the two minuets that frame the Adagio and is the leading light in three of the finale’s six variations.