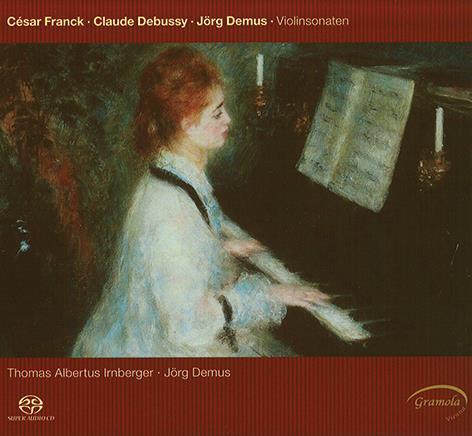 An unusual supporting work for the Debussy/Franck sonata coupling comes as a pleasant change, and it is a bonus to have its composer performing alongside its dedicatee. An expression of affinity to nature, Jörg Demus’s Sonata Sylvestre (Forest Sonata) spawns complementary programmatic titles for each of its five movements. It comprises a mélange of styles, ranging from the simple, melodious ‘Forest Fairytale’ to the mysterious nocturnal fourth movement, ‘With the seven dwarves’, which quotes ‘The rain in Spain’ from My Fair Lady, and the final chirpy rondo (‘The Sparrow’). Thomas Albertus Irnberger and Demus bring these magical woodland scenes expertly to life, characterising each movement with skill and artistry.

They give big-boned and strongly projected accounts of the other two works, but, for me, their Debussy lacks the subtle half-lights and natural colours reproduced by some competitor duos and fails to penetrate to the heart of this elusive, essentially melancholy music. Further, their finale seems rushed and over-aggressive; but their Franck has sentiment, contrast, animation and fire. They give the first and third movements a contemplative, sometimes inward quality, but their second movement has all the requisite turbulence, passion, grandeur and pathos, and their finale has striking sensitivity and freedom. The recording is clear and vibrant.