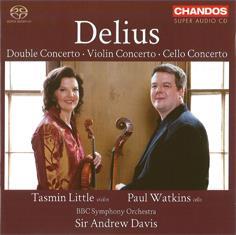 Taken en masse, Delius’s three string concertos can seem like a knotted skein of rhapsody, especially given their one-movement forms and generally moderate tempos. But bear with them, immerse oneself in their enveloping sound world, and they reap more wide-ranging rewards, emerging individually as structurally and motivically tight masterpieces of English Romanticism. That is certainly how they come across in these experienced hands.

Little, indeed, has recorded the two works with violin before. Her 1991 EMI account of the double concerto with Raphael Wallfisch had a more transparent sound than this new recording, which can sound a tad congested when both soloists are playing, but as an interpretation it is arguably richer in insight. Little and Paul Watkins seem of one mind in their sensitive but expansive delineation of Delius’s themes, culminating in a glorious depiction of the kind of radiant sunset imagery in which the composer excelled.

The solo concertos fare better in terms of audio balance, and here one can hear both soloists’ elegant shaping of line, their finely attuned sense of timing and their subtleties of tonal colouring. Little’s Violin Concerto has real guts, yet also a dancing quality at times, and Watkins brings poignancy to the autumnal glow of the Cello Concerto while revelling in the deliriousness of its more frenetic heart. Andrew Davis and the BBC Symphony Orchestra provide idiomatic support throughout.