Dedications... A Life in Music. Works by various composers 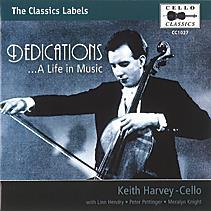 During his professional career as an orchestral soloist with the London Philharmonic Orchestra, English Chamber Orchestra and as cellist in the Gabrieli Quartet, Keith Harvey has been generous in his support of colleagues, not least in sharing his discoveries of music. No surprise, then, that these two CDs are filled with a wide range of material, 37 short pieces in all, many of them obscure or arranged by Harvey himself. The most substantial item on the first disc, though, is the Bach/Busoni Chromatic Fantasy and Fugue, a wonderfully ornate and monumental arrangement. The recording quality, particularly of Linn Hendry’s piano sound, could be more refined, but the interpretation is stylish and impassioned. Gershwin’s It Ain’t Necessarily So in Heifetz’s arrangement is great fun as well.

These CDs really are a gold mine of riches for anyone looking to sparkle up their repertoire – for example the less well-known Spanish works by Joaquín Nin, particularly Andalucia from his Spanish Suite. Likewise, the extended Variations on Three Russian Airs by Beethoven pupil Ferdinand Ries are worthy of exploration and are persuasively performed here.

Clearly Harvey was much inspired by vocal repertoire, with some successful transcriptions such as Duparc’s Chanson triste and Monteverdi’s Lamento d’Arianna. Equally entertaining are the autobiographical booklet notes that explain Harvey’s connections to the pieces alongside his admiration for some of the great cellists of the past and present.