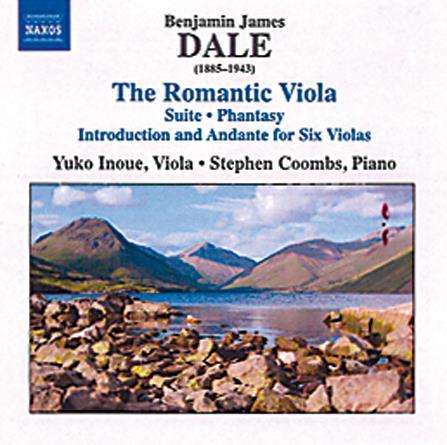 What a wonderful composer Benjamin Dale was. In the words of his composition teacher at the Royal Academy of Music (RAM), Frederick Corder, Dale wrote ‘fewer and better works than any English composer of his generation’, but unfortunately his later administrative work at the RAM and elsewhere prevented him from building on the success he achieved in his twenties, when all the works included here were created.
The RAM’s viola professor Lionel Tertis inspired Dale in 1906 to write his Suite op.2. This monumental, half-hour-plus piece tests most aspects of technique and requires not a little stamina as well. Supported to the hilt by Stephen Coombs, Yuko Inoue gives it an appropriately effusive reading, the unending melody of the Romance beautifully floated, the passages of mellifluous 6ths nicely intoned, the horn imitations given a suitable edge.

The multi-sectioned, one-movement Phantasy op.4 from 1910 inhabits the same hothouse atmosphere, but is comparatively compact at 20 minutes. A year later, Dale wrote a viola sextet – Introduction and Andante op.5 – for Tertis to play with his class, as Inoue (Tertis’s successor at the RAM) also does here. This piece, rather redolent of Schoenberg’s Verklärte Nacht, receives a well-balanced, tight reading and the best recording quality. Elsewhere, the microphone can catch an edge to Inoue’s A-string tone that does less than complete justice to its well-known beauty.