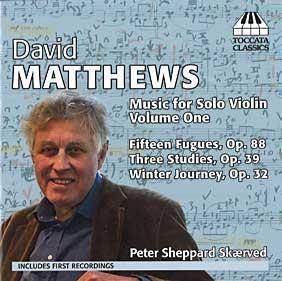 This disc represents roughly half of David Matthews’s output for solo violin and highlights the composer’s insight into writing for the instrument, despite not being a player himself. The Three Studies were written in 1985 for the first stage of the Carl Flesch International Violin Competition, and become progressively more challenging for the player, posing a range of challenges. Throughout, Peter Sheppard Skærved sounds confident, yet relaxed enough to let the pieces breathe.

Those Carl Flesch competitors would have found the 15 Fugues, begun in 1998 but largely composed in 2001–2 much more taxing. Though they contain references to the cuckoo and the blackbird these are uncompromising pieces, sometimes clearly pushing Sheppard Skærved to his limits – there’s a brief instance in no.3, for instance, where the tuning goes awry, and just occasionally it seems barely possible to keep the two lines going. This is perhaps a reason why composers tend to use the fugue sparingly (and mostly non-sequentially), but there’s an earthy, semi-abstract beauty here that is illuminated in the playing.

The highlight is the semi-autobiographical Winter Journey (1982), inspired by Schubert’s Winterreise (two of whose songs it quotes). Approaching the expressive intensity of a psychodrama, it also reflects spaciousness in its sense of isolation. Sheppard Skærved lends wonder to the piece and, as throughout this disc, is recorded in an imposing, up-close sound.