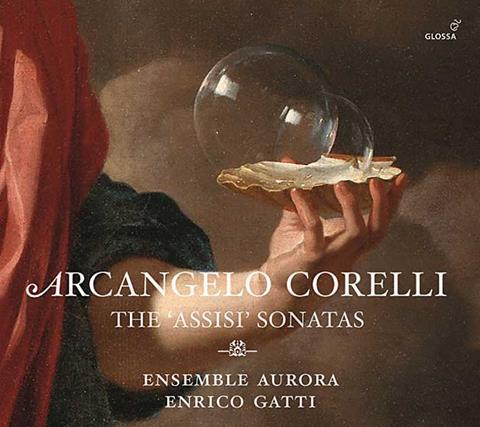 Scholars have hotly debated the provenance of a manuscript of twelve sonatas attributed to Corelli, discovered in 1963 by Mario Fabbri in the library of Assisi’s Franciscan monastery. Musicologist Hans Joachim Marx considered these works spurious, assigning them only to the appendix (Anh.38–49) of his catalogue of Corelli’s original works; however, researcher Guido Olivieri and violinist Enrico Gatti claim that available evidence confirms them as some of the Italian’s early experiments in the genre.

Whoever their composer, these brief, three-movement sonatas serve as excellent vehicles for Gatti’s agile technique and flamboyant performing approach, particularly their gigas (Anh.47, 48) and their challenging double/multiple-stopping (Anh.38, 43, 49). His sweet-toned lyricism, plentiful vibrato and expressive sensibility unfold each phrase naturally and his doubles for the Gavotta of Anh.38 and stylish embellishment of the introductory preludios flow spontaneously and convincingly. He is accompanied by the sensitive pairing of cellist Gaetano Nasillo and harpsichordist Anna Fontana, who are recorded too discreetly in the balance, especially when imitating the violin; the accompaniment is pared down to one instrument in Anh.43 (cello) and 44 (harpsichord). Perceptive accounts of four later, more substantial sonatas from the Corelli catalogue’s appendix (Anh.33–36) are also included, with Anh.35 in A minor the pick of the bunch.