The 17-year-old from Nottingham performed Shostakovich’s Cello Concerto no.1 in the final 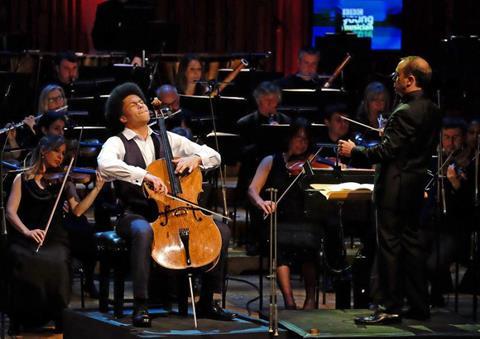 Cellist Sheku Kanneh-Mason has won the 2016 BBC Young Musician award. The 17-year-old from Nottingham saw off competition from saxophonist Jess Gillam, 17, and French horn player Ben Goldscheider to clinch the award at the final of the national contest, held at London’s Barbican Hall on 15 May.

A student of Ben Davies at the Junior Royal Academy of Music, where he holds a junior scholarship, Kanneh-Mason (pictured) is a member of the Chineke! Junior and Professional Orchestra, set up by double bassist Chi-chi Nwanoku in 2015. He also performs in the Ash String Trio and the Kanneh-Mason Piano Trio. Last year he was featured, alongside members of his family, in the final of the UK variety programme Britain’s Got Talent.

In the final, each musician performed a concerto with the BBC Symphony Orchestra conducted by Mark Wigglesworth. The jury was made of composer Dobrinka Tabakova (chair);  cellist Jamie Walton; saxophonist Amy Dickson; French horn player Alec Frank-Gemmill; and David Pickard, director of the BBC Proms.

Founded in 1978 as BBC Young Musican of the Year, the biennial competition has been won by many artists who have gone on to international careers, including violinists Nicola Benedetti (2004) and Jennifer Pike (2002), and cellists Natalie Clein (1994) and Guy Johnston (2000).