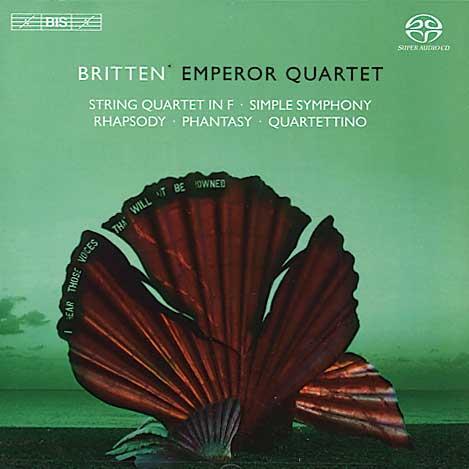 The Strad Issue: December 2014
Description: A fascinating insight into the early works of a master of the quartet
Musicians: Emperor Quartet, John Metcalfe (viola)
Composer: Britten

This is the third instalment of the Emperor Quartet’s cycle of Britten’s complete works for string quartet. With the three numbered quartets already covered, this issue focuses on a collection of juvenilia, and also includes the op.4 Simple Symphony, which, completed at the age of 20, is the most mature piece on the disc. Throughout, the Emperor musicians play with an instinctive shared vision, whether in the alertness of the Simple Symphony’s ‘Playful Pizzicato’ or the austerity of the Phantasy in F minor (in which the quartet is joined by violist John Metcalfe).

It’s difficult not to hear echoes of Debussy’s String Quartet in the 1929 Rhapsody and, aptly, there’s a natural fluidity to the playing, often suffused with magical textures. By contrast, the Emperor players respond equally well to the tightly coiled, abstract expression of the consciously progressivist Quartettino. There’s focused playing, too, in the Phantasy, and the whole disc is captured in vivid detail and with a spacious soundstage, across which the players shift seamlessly between contrapuntal and harmonic textures. Save for the early String Quartet in F major, with its three Allegro movements, this disc is not an easy listen. It is a very illuminating one, though, and the playing is unarguably distinguished.