In the following excerpt from an article on string quartet playing, published in The Strad, April 1908, our writer offers advice on achieving cohesion – and interest – in your group playing 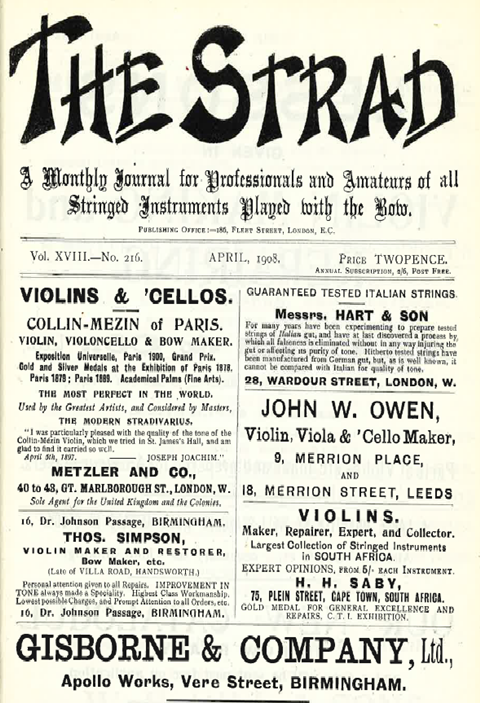 When once a quartet is formed, intuitive playing together ought to be the main idea to which the players should devote their attention. If four good instrumentalists were set down to perform a quartet, their rendering as regards notes and technique would likely reach a high level, but the ‘ensemble’ playing would most likely be mediocre. It would be the most natural consequence, as the individual playing of each member would differ more or less from his three partners, especially in passages and phrases passed on from one instrument to another. In true string quartet playing no instrument ought to predominate, all four should have their equal share of work to perform. Good ensemble playing should be the main idea of every quartet to produce.

Another important feature is the art of accompanying. Each member of a quartet has this more or less to do, and sometimes it requires considerable skill on the part of the player to perform his accompaniment with interest, and to avoid monotony. For an instance is the variations Haydn wrote on the German National Hymn in the ‘Emperor’ Quartet in C op.76. First there is the Hymn, beautiful and richly harmonised, played by the four instruments; and here, while passing, one can see what important ensemble playing would be required. The first variation consists solely of a violin duet, the second violin having the theme while the first violin has a beautiful and rather elaborate accompaniment. The leader of the quartet must take care not to play too loudly or drown his partner’s melody, but at the same time he must give due importance to his part, as in reality – though serving as an accompaniment – it is a solo. To speak figuratively, it is a network of notes thrown over the melody, and this ought to be approximately the idea conveyed to an audience.

The viola and cello have each in turn their melody to perform as solo, being accompanied by the three remaining instruments. As it happens, all the accompaniments in these variations of Haydn’s are of an interesting  and attractive kind, but in some of his other slow movements – where the chief  interest lies solely between the first violin and cello – the second violin and viola have a rather monotonous part to get through. Often the accompaniments in such cases consist mainly of a mere reiteration of single notes or phrases, which, though forming an important section of the composition, are difficult at times to perform in an interesting manner. For such passages as these it requires considerable skill on the part of the player to bring out the various points of his role and still be subservient to the instrument that has the solo. It is through constant practise and insight into the chief characteristics of the quartet that accompaniments such as in these special cases can be properly and interestingly treated.

This article was first published in The Strad, April 1908. For more expert advice on how to improve your playing, subscribe to The Strad or download our digital edition as part of a 30-day free trial. To purchase back issues click here.