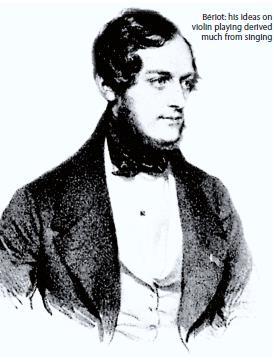 The Belgian pedagogue, who was born on this day in 1802, combined elements of the human voice with the virtuosity of Paganini in his violin treatise. Robin Stowell considers his Méthode de violon alongside the Violinschule by Joseph Joachim and Andreas Moser

The violin playing traditions of Giovanni Battista Viotti, Pierre Baillot, Pierre Rode and Rodolphe Kreutzer were developed by Charles-Auguste de Bériot, who brought to them the bel canto style of his eventual wife, the mezzo-soprano Maria Malibran, and the virtuoso vocabulary of Nicolò Paganini. As a violin professor at the Conservatoire Royal de Bruxelles (1843–52), Bériot established a Franco–Belgian school of violin playing. His Méthode de violon op.102 (Paris, 1858) focuses on ‘imitating the accents of the human voice’ and betrays the influence of the singing treatise by Malibran’s father, Manuel García.

Bériot devotes the first two parts of his Méthode to technique; part three concentrates on style. Much of his instruction regarding posture and holding the instrument and bow mirrors that of Baillot. He endorses solfeggio (the vocalising of notes in a scale or exercise to syllables such as do, re, mi, fa, so, la and ti) as ‘the basis of a musical education’, begins scale studies with G major rather than the then customary C major, and emphasises the importance of sonorous tone production through a combination of just intonation, straight bowing and skilful bow management. He recommends introducing messa di voce over an entire phrase rather than on individual notes, and discusses a wide range of bowings, including ‘elastic’ and ‘rebounding’ strokes, and various ways of reproducing dotted rhythms according to character, context and taste. He perpetuates Viotti’s ‘la gamme muette’ practice technique which involves extremely light, slow and sustained bowing in scales, and advocates spreading chords slightly and always emphasising the highest note.

‘Order, light and shade, the pronunciation of the bow, its punctuation, its phrasing, the appoggiatura, the vibrating sounds, accent, and gradation’ are, according to Bériot, the most significant elements of stylish performance. He discusses each in turn, clarifying his instruction with duet arrangements of opera arias, complete with texts, and consistently providing analogies with vocal performance. He believes violinists should aim to match singers’ diverse shades of articulation (particularly of consonants), points of repose and expression in the phrasing of melodies, and natural ‘method of separating words and syllables to give them more emphasis and accentuation’ according to the prevailing sentiment or character. Viewing the bow as the violinist’s equivalent of the singer’s breath, or even larynx, Bériot observes the hierarchy of the bar and the traditional rule of down bow by marking ‘all the long syllables with a down bow, and the short with an up bow’.

Bériot considers portamento as an important effect for facilitating cantabile. He distinguishes three portamento styles: the ‘light and rapid’ (vif) for fast passages and ‘among notes drawn with grace or pushed with energy’ (example 1); the ‘gentle’ (doux) for passages of a tender character (example 2); and the ‘dragged’ (traine) for ‘plaintive or sorrowful’ contexts (example 3). He aligns them with the singing of ‘two notes joined by the same syllable in vocal music’, but cautions against employing them in sacred music or using them excessively or too slowly in other genres. The music examples in Bériot’s treatise reveal the selective introduction of portamento, largely for ascending leaps, on strong beats and during melisma-like passages (example 4); but two successive portamentos should be avoided, particularly when ascending and then descending.

He similarly encourages the player to use vibrato in moderation and only ‘when the dramatic action compels it’, for it ‘indicates the emotion of the soul’. He refers to ‘soft’, ‘medium’ and ‘loud’ vibrato, illustrating these gradations with signs seemingly aligned more with dynamic level than speed or breadth of oscillation. Thus, in example 5 he advocates a ‘loud’ vibrato for the heavily accented, long ‘good’ (buone) note in the first bar and a ‘soft’ vibrato for the shorter repeated notes in the next bar. Bériot further illustrates in the Méthode the application of his principles in an annotated solo part of his own Ninth Violin Concerto. His commitment to a predominantly vocal style of violin performance was continued by Hubert Leonard, who succeeded him at the Brussels Conservatoire and published several pedagogical works, including Premiers principes du violon op.47.

The Franco–Belgian school’s performing style, incorporating springing bowings and flying staccato, contrasted strikingly with the on-the-string preferences of most German players. Nevertheless, Louis Spohr’s principles were perpetuated and broadened in Germany, notably by his pupil Ferdinand David, who was violin professor at the Leipzig Conservatoire from its inception in 1843 (see separate text below). Some of Spohr’s principles also provided the foundation for other 19th-century Austro-German writers, among them David’s pupils Henry Schradieck and Karl Courvoisier, as well as Joseph Boehm’s pupil Jakob Dont (see separate text below). Some were even reproduced verbatim in the early 20th century, notably in the three-volume Violinschule (1902–5) published under the names of Joseph Joachim, a disciple of David and pupil of Boehm, and his pupil and assistant Andreas Moser. The text was written largely by Moser; Joachim influenced and endorsed Moser’s views and contributed performing editions, with cadenzas as appropriate, of the 16 works included in the third volume.

Joachim and Moser’s Violinschule aims to cultivate the technical skills that ‘serve the object of genuine music’. It rejects the ‘Geminiani grip’ for the establishment of the left-hand position and emphasises the role of scales in developing fundamental left and right-hand technique. The study of melodic minor scales precedes that of harmonic ones; economy of shifting is valued in the pursuit of true intonation; and the customary prioritising of the third position over the second, and ‘uneven’ (odd-numbered) positions generally, is rejected. The thumb’s contribution towards achieving dexterity in shifting and emulating ‘the human voice in expressive singing’ is particularly emphasised, and portamento is endorsed as a means of expression and of preserving timbral uniformity, provided that it is introduced with discernment and that, in keeping with Spohr’s principles, the starting finger undertakes the slide and the intermediate notes are imperceptible.

Sliding with the second of the two fingers is considered faulty except when sliding to a harmonic. Joachim and Moser actually denounce as old-fashioned Leopold Mozart’s statement that the bow arm should consistently be held low, advocating instead free movement of the upper arm at the shoulder joint. Neither their illustrations nor their text corroborate Carl Flesch’s criticisms of Joachim’s allegedly cramped and unnatural bowing style, caused by a combination of a low elbow and a high wrist. Furthermore, they broaden the bowing vocabulary of Spohr to include spiccato and springing bowings as fundamental bow strokes and criticise him for rejecting the selective use of artificial harmonics and left-hand pizzicato. They oppose Bériot’s method of chord arpeggiation, opting for the simultaneous execution of the notes of three-note chords wherever possible.

However, they do cite Spohr on vibrato usage, recommending its selective introduction only where expression demands it and recognising ‘the steady tone as the ruling one’. As with Bériot’s Méthode, singing provides the model: the addition of words to the opening bars of Joachim’s Romance op.2 clarifies the accentuation, character and vibrato usage, which should be ‘only, like a delicate breath, on the notes under which the syllables “Früh” and “wie” are placed’ (example 6). In addition to the inclusion of Joachim’s editions, volume three comprises ten short essays by Moser on ‘style and artistic performance’. Some of these articles relate to issues already considered in the first two volumes: vibrato, portamento, accentuation, phrasing, timbre and ornamentation. Others focus on the importance of fidelity to the composer regarding expression, style and delivery; the merits of uniform orchestral bowing; the relationship between violin and continuo; tempo modification, rubato and prolongation; and the appreciation of personal artistic idiosyncrasies and national styles. Joachim and Moser recognise that performers must exercise flexibility in making performance decisions. ‘It is not sufficient to play the notes correctly,’ they maintain. ‘The living spirit of a work of art must be made apparent if its reproduction is to make any impression.’