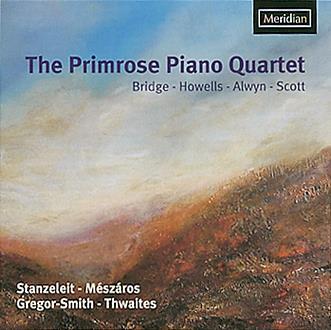 This is a most attractive programme, gathering together four little-known 20th-century British piano quartets. The performances place them in direct line from Elgar and bypass the German and French influences that fashioned the young Frank Bridge and Cyril Scott.

All were written within conventional tonality, with William Alwyn’s Rhapsody of 1950 the most modern in outlook – the pounding rhythm of its opening takes a fleeting look at music of the time.

The serious output of the Liverpool-born Cyril Scott had rather fallen into oblivion, side-tracked by his reputation as a composer of lightweight keyboard cameos, until a recent renaissance of interest in his music on disc. He was 21 when in 1900 he composed the highly charged Piano Quartet, and here its outgoing ardour has been fully realised.

Born in 1879, the same year as Scott, Frank Bridge took much longer to find critical acclaim, though the prizewinning Phantasy Piano Quartet of 1910 helped to establish his name. Six years later came the Piano Quartet by Herbert Howells, its superbly scored and boisterous atmosphere just predating those dark days that ended his life in a mental hospital.

The Primrose Piano Quartet was founded in 2004 with musicians from The Lindsays and from the Chilingirian and Edinburgh quartets. Their overall quality is warm, generous and deeply committed to this repertory, with just the Scott exposing some uneasy cello intonation. The only drawback is a recording that seems to split the piano from the strings so that their sound never seems to blend. But don’t let that detract you from adding this vibrant music to your collection.