Bribery should not be used as motivation to practise

For years violin teacher Miranda Hughes used rewards and incentives to motivate her pupils to practise. Then she took on her own daughter and had to question her whole approach 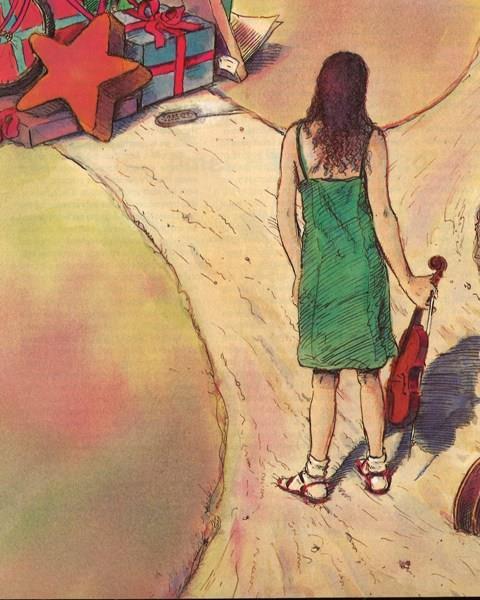 When I began teaching my daughter to play the violin it became apparent that I did not understand how to motivate her to practise. I knew what other parents were doing wrong when my other students did not practise, but when it came to dealing with my own child all my clever ideas were worth nothing. My four year old, who clearly wanted to play the violin, simply did not want to practise.

I thought I was doing the right sort of things. I was providing the perfect music-filled family environment, making practising fun, drawing charts, playing games, using stickers, counting repetitions in creative ways and praising every little effort with enthusiasm. In fact, some days I felt as if I was doing all the work while my daughter was watching me jump through hoops with idle amusement. Although I was trying to motivate her with all the correct techniques, practice sessions were becoming exercises in passive resistance. I was baffled.

While I was struggling to get us out of that awful first slump, I stumbled across a book which calls into question the entire category of tactics I had been trained to use. Alfie Kohn's 'Punished by Rewards' suggests that the creative incentives, praise and rewards I had been using were not the solution to our troubles, and they might even be part of the problem. In this intelligent and well-written book, Kohn concludes that rewards fail for many reasons: they punish, they rupture relationships, ignore the underlying reasons for the behaviour, discourage risk-taking and undermine intrinsic motivation.

The use of rewards forms part of what Kohn refers to as the 'pop behaviourist doctrine' - the legacy of early experimental psychologists Ivan Petrovich Pavlov and B.F. Skinner, encapsulated in the phrase 'do this and you'll get that'. Although my violin pedagogy training taught me to use rewards rather than punishments, Kohn says that these two approaches are not opposites - rather, they are two sides of the same coin. Both attempt to guide behaviour by exerting control over people, and this controlling intent is harmful.

Kohn's ideas seem to carry the weight of solid scientific evidence. Virtually all the research done over the past 30 years confirms the seemingly incomprehensible conclusion that rewards do not work. The evidence is made even more convincing by the fact that the researchers were often confounded by their findings, having set out to prove the complete opposite. Even the 'social reward' of praise, it appears, is suspect. Studies demonstrate that exuberant praise has the capacity to undermine intrinsic motivation and reduce performance, by distracting the individual from the task, clashing with the individual's own beliefs, implying a lack of faith in his or her abilities and creating a controlling environment. And, of particular interest to music educators, praise and rewards are most likely to undermine intrinsic motivation and interest when the task is one which is inherently interesting or demanding of creativity.

These ideas were revolutionary to me and very unsettling. I would have tossed aside all this research but that it seemed to explain some of the hitherto mysterious patterns I had encountered in the motivation of particular violin students. An adolescent girl, encouragecl to practise two hours a day by the promise of a video game, achieved her goal, but her playing failed to improve despite all this work and her practising commitment subsequently dwindled. A five-year-old student who initially worked diligently at lessons, became so extrinsically oriented by the reward of a thank-you sticker that his lessons turned into contests of control. A teenage boy set himself the extrinsic goal of a challenging performance examination; although he worked hard, improved his playing ability dramatically and passed his examination, his previously strong intrinsic motivation then deflated completely. And in my daughter's case I found that she would deflate completely, shaking her head emphatically, if praise became emotionally exuberant.

As I began sharing Kohn's cautionary ideas concerning rewards with other parents and teachers, their first reaction was invariably one of disbelief. How could this possibly be true? We all know that rewards work - we've all seen them work tremendously well. When we promise a pizza party, our students practise daily. When we clap and exclaim, the young beginner grins and plays the passage again beautifully. And our senior students work extra hard in order to qualify for a certificate of merit at the music festival.

Kohn and his colleagues would admit that rewards, bribes and praise do indeed work in the short term, but at great cost. Rewards, like punishments, are useful for getting one simple thing: temporary compliance. But when there is no longer a goody or a gushing commendation to be gained, compliance tends to drop below baseline levels. And we seldom think to question the principle of rewards when motivation drops - we simply look to use more rewards. Some of my colleagues justified their own use of rewards and praise by claiming that it is the spirit of the reward that matters. 'My rewards are a way of showing my pleasure and gratitude for a job well done,' they said. Some research suggests that it is indeed possible to use rewards in non-controlling ways and minimise the negative effects. But, we are cautioned, this is a tough act. The person administering the rewards has to be very conscientious, because rewards tend to carry a controlling significance for the people receiving them, regardless of intent. Is it really prudent to use a motivational gimmick if it is fraught with such risk?

With careful thought, most of my colleagues were able to come up with instances from their own experience where rewards had indeed appeared to have negative effects. But their next question was always 'what is the alternative to the use of rewards?' Without a realistic alternative, it is difficult for us to relinquish a motivational method which gives such a satisfying sense of control.

When people ask, 'what can we do instead?' they are usually looking for another gimmick with which to buy short-term compliance. The real answer to motivation is much deeper than this, but much more respectful of the relationships and people involved. Kohn and his colleagues suggest that we need to look beyond doing things to people, and instead do things with them. We need to make tasks meaningful to our students, co-operate with them in defining problems and support their autonomy while guiding them through the problem-solving process. This is what Edward Deci in his book 'Why We Do What We Do' refers to as 'autonomy support'. And this, he says, is the foundation which builds self-motivation and gives authentic personal meaning to a task.

Letting go of the satisfying sense of control engendered in a teaching style based on the use of rewards can be difficult. We teachers have invariably been raised in a cultural milieu where we've been subjected to these sorts of practices ourselves. 'Pop behaviourism' is part of our societal fabric, from bribes for toilet-training to salary bonuses in the corporate boardroom. We find it hard to accept that a good job has truly been done unless it is rewarded in some overt way.

And so we as teachers tend to transfer our own extrinsic orientation to our students. To stand up against this behaviourist tide requires courage and faith. Teachers must have faith, first, that the activity is interesting or important enough to be seen as worthwhile and, second, that their students will wish to undertake an autonomous role in their own education. And students must have faith in their teacher's efforts to support their autonomy are more than idle posturing. If the teacher takes back control the instant the student hesitates or makes a poor judgernent, the development of mutual trust will be derailed.

The question 'how should we motivate our students?' turns out to be the wrong question entirely. Instead, we should be asking 'how can we create the conditions under which our students will motivate themselves?' With the mutual trust, respect and suppor