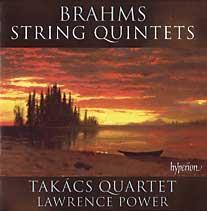 These players project Brahms’s thick, symphonic textures with warmth and passion, teasing out countless subtleties with their responsive interplay. Violist Geraldine Walther is outstanding in the first movement of op.88, her tone wonderfully sonorous in the animated second theme. She and guest violist Lawrence Power form the ensemble’s core throughout, adding tonal warmth in the increasingly impassioned, declamatory slow sections of the second movement, headed by András Fejér’s cello solo, beautifully rendered. The finale’s mix of muscular counterpoint and lyricism is perceptively realised, Brahms’s subtle integration of the opening fughetta theme within the movement’s other melodic interest being intelligently conveyed.

These performers’ flexible interpretation of op.111 surpasses any that I have heard before. They revel in the first movement’s striking contrasts, making complete musical sense of its compact, dense and thick-textured development. They convey the melancholy of the Adagio in suitably dark tones, Walther’s sublime viola playing again standing out both at the opening and in a soulful quasi-cadenza towards the end. They play the subsequent intermezzo with appropriate wistfulness, executing its trio’s alternating duets with debonair grace, and their full-blooded finale is ebulliently energetic, admirably capturing its Hungarian gypsy idiom. The recording is vivid and immediate, if sometimes a little too present.