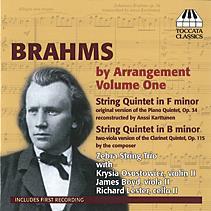 For Brahms enthusiasts, the major draw of this release will be Finnish cellist Anssi Karttunen’s reconstruction of the String Quintet in F minor – the ‘two-cello’ quintet of 1862 which arrived in its final form, the well-loved Piano Quintet, by way of a two-piano version. If nothing else, it’s a challenge to objective listening. At first you miss the lack of contrast between piano and strings: the sparkling attack of the piano in the familiar version aerates the texture, and the contrast between theme and accompaniment seems crucial in the second-movement Andante, un poco adagio. Eventually the ear becomes reattuned, but, even so, there’s a raw, unvarnished quality to the playing here that doesn’t help. It’s exacerbated by the recording, which is quite close and unblended, with a lack of overall bloom.

The two-viola string quintet version of the late Clarinet Quintet op.115 is better known but still a rarity. In his excellent booklet notes, Malcolm MacDonald posits that the extra viola’s ‘darker, huskier timbre… imparts a deeper intimacy [compared with the original clarinet version] that completely nullifies the risk of sentimentality’. This is certainly true of the Adagio, which gathers a cohesive tonal intensity, though the players still deliver a sense of quietly unfolding nostalgia, to pulse-lowering effect. Almost a disc of two halves then, but one worth experiencing.