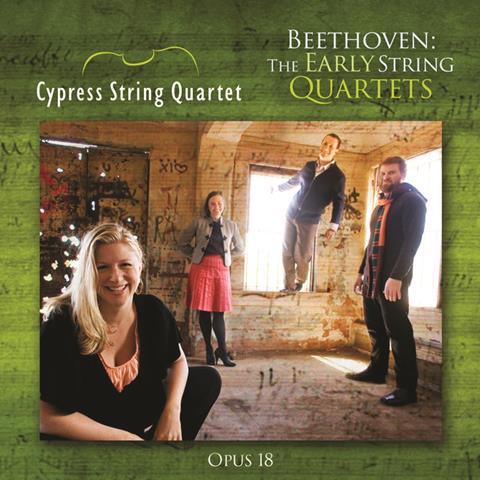 The Cypress Quartet has now played its last concerts – a Beethoven cycle at an Alaskan festival – and this recording is a fitting envoi to two decades of music making based around America’s West Coast (an encore of Brahms’s sextets was recorded within the final tour). In these unhurried, considered readings of op.18 the quartet shows Beethoven not so much confronting a tradition inherited from Haydn and Mozart as assimilating it within his own emerging voice.

The slow movements are broad-based and songful, often warmed by wider vibrato than commonly heard nowadays, though a lovely summer light shines on the Andante and variations of no.5. The minuets are eminently danceable, taken at polite tempos but packed with subtle, Haydnesque contrasts: nothing here is played for granted. Even in the very quick finales the Cypress gives full value to each note, which sometimes stretches the tuning of octaves and unisons. Without courting anachronism, the players find a broad shape to the first movement of no.3, which looks forward to the composer’s later and even more soul-searching music for the medium.

I most enjoyed nos.5 and 6, which give a decisive flavour both of Beethoven’s explosive temperament and of the four distinctive personalities in front of the microphone. In op.18 Beethoven has frequent recourse to sforzando markings, which can become fierce and bullying elsewhere in the set, especially no.4. More truly quiet playing would be welcome; also the inward address proper to the Adagio of no.1, which may more readily come to the Cypress players in front of an audience rather than the microphones (though the recording itself is superbly balanced between parts). Muscularity, rather than lightning-quick reflexes, is more evident in their oaky tutti blend. The Jerusalem Quartet (Harmonia Mundi) may not have lived with this music for so long but what the ensemble have to say about it is fresher and more daring, and surely audacity is the keynote of op.18.