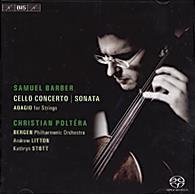 How good to have a fresh recording of Barber’s Cello Concerto after rather a dearth of versions over the past decade. Written in 1945 for Russian cellist Raya Garbousova, it is an engagingly optimistic work, and its relaxed, lilting quality is well matched on this disc by natural, unobtrusive recorded sound.

Zurich-born Poltéra and the Norwegian players give a sparky, vibrant performance that brings out the work’s pastoral qualities. The solo cello’s meandering entrance gradually ascends, giving Poltéra the first of many opportunities to show off his fluid, cantabile tone in the high reaches. There’s an attractive lilt to his Andante sostenuto, and the players pull the tension taut in the more urgent finale with its highly charged solo episodes.

Barber’s Cello Sonata is a much earlier work, written at the end of his studies at the Curtis Institute in 1932. Poltéra plays its Brahmsian melodies expansively, leaning into the strings of his 1711 ‘Mara’ Stradivari, his broad strokes intensifying in passion in the finale. The unusual middle movement’s clever, scampering two-against-three presto section is sandwiched within two parts of a devout Adagio, graced with Poltéra’s controlled, wide vibrato.

Litton presides over the inevitable Adagio for strings with masterly control, conjuring up a fine shading of tones and just the right big but restrained emotion.