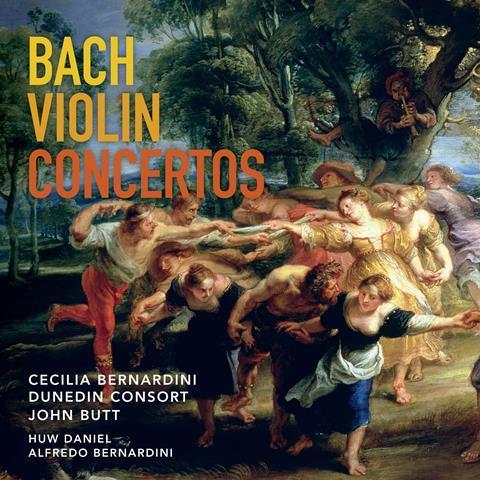 It takes something distinctive to compete favourably with the countless available recordings of these concertos. For many, that something may be Cecilia and Alfredo Bernardini’s eloquent reading of Cantata no.21’s Sinfonia. Daughter (distantly balanced in the opening movement) and father are also the soloists in BWV1060R. Although Alfredo’s vibrato width

may not have universal appeal and intonation is variable, both players keep the Adagio’s cantilena flowing, adding only modest extempore ornamentation, and they take the allegros at nimble tempos. Equally flowing and athletic is Cecilia’s neatly turned account of the ‘Double’ Concerto, partnered by Huw Daniel. However, their exhilarating final Allegro seems too driven for optimum triplet definition.

Bernardini offers proficient, well-articulated readings of Bach’s two solo violin concertos, her buoyant, small-scale orchestral accompaniment spawning light, spruce textures in the outer movements and making inner detail clearly audible. She adopts a particularly lazy tempo for the E major Concerto’s slow movement but shapes its sustained melodic line with commendable expression. Some audible shifting slightly disfigures the melody of the more flowing Andante of BWV1041, the sprightly finale of which features an unusual and crisply detailed mix of slurred and articulated bowing. Apart from the above-mentioned balance issue, the recording is clear, resonant and true.