Anderson: In lieblicher Bläue; Alleluia; The Stations of the Sun 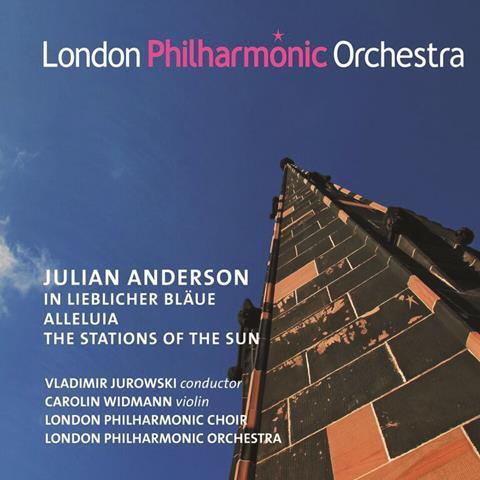 Julian Anderson was the London Philharmonic Orchestra’s (LPO) composer-in-residence from 2010 to 2014, and this captivating new disc on the orchestra’s own label celebrates that creative partnership in one major work written during his tenure, and two others performed and recorded at that time.

The sumptuous In lieblicher Bläue (2015) for violin and orchestra is the standout piece here, given a reading by its dedicatee Carolin Widmann that is so supple, considered and committed that it’s hard to believe it’s a live capture of the work’s very first performance (reviewed in the June 2015 issue). Based on a prose poem by Hölderlin, it gives the soloist a semi-theatrical role – Widmann begins offstage, moves onstage to the conventional soloist’s position and finally turns her back to shun the audience, in the same way that the poet isolated himself from society in his later years – all conveyed clearly in the disc’s intimate, closely recorded sound. Widmann responds with passion and sensitivity to the piece’s long-limbed lyrical lines, and she’s especially effective in the dark, vibrato-less closing section.

Both here and in two other finely crafted works – the hugely colourful choral Alleluia (2007) and the remarkable, folk-inspired Stations of the Sun (1998) – Vladimir Jurowski draws vibrant, intensely focused playing from his LPO forces. This is thoroughly likeable, engaging music.