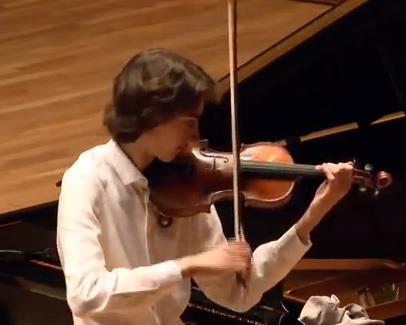 Violinist Stephen Waarts was the only string player among the three first-prize winners of this year's Young Concert Artists International Auditions in New York.

The 17-year-old American violinist, who studies at the Curtis Institute of Music with Aaron Rosand, joins the roster of Young Concert Artists, and will receive at least three years of management services and career development support. Along with the other winners he will feature in Young Concert Artists Series concerts next season in New York, Washington DC and Boston.

Waarts grew up in the Bay Area of California and started the violin at the age of five. In 2011 he won first prize at the International Louis Spohr Competition in Weimar, Germany, and earlier this year he was a second-prize winner at the Montreal International Music Competition. In addition to Aaron Rosand, his teachers have included Li Lin and Itzhak Perlman.

Young Concert Artists was established in 1961 and has supported the early career development of such artists as Pinchas Zukerman, Carter Brey, Ani Kavafian and the St Lawrence Quartet. The organisation's current roster of string players includes violinists Benjamin Beilman and Bella Hristova, cellist Cicely Parnas and the Hermès Quartet.