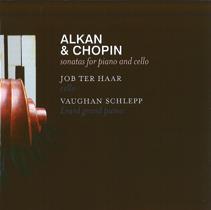 The unattributed booklet notes for this recording state that Job ter Haar uses vibrato sparingly. In fact vibrato is so rare that the cellist, whose teachers at the Hague’s Royal Conservatory included Anner Bylsma, seems to take an almost masochistic pleasure in withholding it – there is not a trace in the lyrical opening theme of the Allegrettino of Alkan’s Sonata, for instance.

Alkan’s writing occasionally sinks to the banal and the early movements fall a bit flat, a result of the limited range of tone colours ter Haar draws from gut strings and a recorded balance that puts the cello slightly too much in the background,. The fast and exciting Saltarello finale fares better, enlivened by ter Haar’s dextrous left hand, neat bowing technique and excellent ensemble with Schlepp.

Ter Haar does use extensive portamento, carefully following fingerings in manuscripts of Alkan and Franchomme, both sonatas’ dedicatee. In the Chopin Sonata, with its more varied phrasing and more interesting melodic line, this is sometimes sufficient as an expressive device. However, the Largo sounds stark and drained of feeling with no vibrato, and the double-stops of the finale could ring out so much better with a little left-hand oscillation.