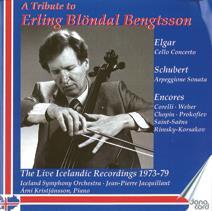 This CD offers a welcome opportunity to savour the skills of the renowned Danish cellist and pedagogue, now in his 80th year. A pupil of Piatigorsky and subsequently his teaching assistant, Bengtsson absorbed much from the Russian master, not least his exceptional bowing technique and elegant phrasing.

An aristocratic reserve characterises his interpretation of Elgar’s Cello Concerto – a winning leanness to the delivery that is just as poignant as some of the more emotionally excessive renditions. It’s not a disc, however, to turn to, however, if you want state-of-the-art sound and pristine execution, for there are gremlins in this live recording, including erratic ensemble and some rushing, for example between figures 8 and 9 in the first movement. Nonetheless, Bengtsson executes the fast passagework of the second movement with a brilliant feathery spiccato, while bringing heartfelt melancholy and nostalgia to the Adagio. Again the finale is mixed, offering wonderful moments alongside some shaky sections, in particular at figure 52.

Schubert’s Arpeggione receives a tasteful performance with no hints of unnecessary indulgence. Once again, clean delivery and elegance are key characteristics of the interpretation, although occasionally Bengtsson has a tendency to move the tempo forward, making ensemble a little awkward. Perhaps the rendition of Weber’s Rondo is the most convincing in showcasing his superb bow control and Classical style of playing.