What makes a concertmaster special? 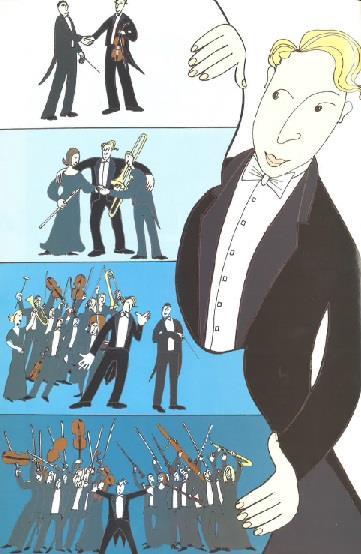 This article was first published in The Strad's February 2004 issue.

It could be the Royal Festival Hall, Carnegie Hall, Berliner Philharmonie, Concertgebouw or the Thétre des Champs-Elysées. The lights dim, a hush falls over the audience. Dressed in formal concert black a sole figure walks to the podium, bows, turns and points with bow in hand to the oboist. A cacophony of sound, and then silence. The conductor comes on, gives the downbeat and the strings play as one with all bows gliding in the same precise movement. Rising out of the magnificent sound soars a glorious violin solo. At the end, thunderous applause; the conductor turns and shakes hands with the leader. Concertgoers recognise the ritual but what lies behind it? What are the hidden pressures, responsibilities and skills of a great concertmaster?

'I see my role primarily as a musical one,' says Alison Bury, one of the three leaders of the Orchestra of the Age of Enlightenment (OAE), a London-based ensemble specialising in pre-20th-century repertory. 'I start with bowings, which influence phrasing. I thoroughly bow the first and second violin parts from the score, and in instances of group melodies, mark all the string parts. I also seat the violin section - our seating is floating.' Catherine Mackintosh another leader of the OAE explains: 'I try to seat players considering their strengths. Some have more experience with Baroque, others with the Classical or Romantic styles. We also like to give players a variety of positions and partners, though every time you move people back a desk they feel demoted and perhaps even demoralised.'

The musical responsibility often extends into the relationship with the conductor. 'I often talk with the conductor about the repertoire,' says Glenn Dicterow, concertmaster of the New York Philharmonic. 'We have conversations about interpretation. In the case of Lorin Maazel, our new music director, who is an exceptionally fine violinist, he might give us his own fingerings and bowings. Working with guest conductors can be more difficult because they have little time with the orchestra and may try to make an imprint within four days. Sometimes their wishes are unclear and I have to translate or interpret what they want.'

During nearly three years as concertmaster of the National Symphony Orchestra in Washington, DC, Nurit Bar-Josef has encountered similar difficulties. 'When we get a conductor who wants something new and it's not working I might mention it, but more often I will just turn to my section and ask them to cross out the mezzo-piano and change the marking to pianissimo, for example.'

'The conductor turns to me when there is a problem,' explains Richard Roberts, concertmaster of the Orchestre Symphonique de Montréal. 'I am the central office that the players can turn to. Their point can be musical or artistic; for example, there could be differences between the score and parts; we may be using a different edition from the conductor. I communicate the discrepancies. A more difficult problem can be the young conductor who may not realise the unfeasibility of a tempo.

'I remember an extreme situation in the early 90s that required my intervention,' Roberts continues. 'We were scheduled to play a large-scale work that featured a solo guitar, written by a living composer. It was so badly written, with absolutely no regard for playability, that after talking with the other principal players and the conductor we decided to slash the piece. We took it from 25 minutes down to five!'

'We are specialists in early-music repertory,' explains Mackintosh. 'However, sometimes the conductors are not. They might ask for a bowing we don't feel is true to the spirit of the music, or be shocked at what they think of as a thin tone, and will consequently ask for too much vibrato. Because we players started the OAE and are self-governing we have control over whom we invite to conduct. If we get a conductor with no experience in the repertory and the performance is unsuccessful, we do not need to repeat that experience.'

'When a conductor says what he wants I have to 'smell' it' concludes Israeli Guy Braunstein one of three concertmasters with the Berlin Philharmonic. 'But we have so many fabulous musicians in our orchestra that they usually catch on faster than I do! I rarely have to show anything or get their attention to change colour. When I first got the job three years ago I was always trying to give signs. Finally I realised that they don't need it, and if we aren't together it is probably my fault.'

What if the problems do come from within the orchestra? Dennis Kim is a Korean-Canadian trained in the US and is in his fourth year as concertmaster of the Hong Kong Philharmonic. 'Seventy per cent of our strings are Chinese, but most of the winds and brass are Western,' he tells me. 'Often we have musical clashes between the Americans and the British, especially intonation within the winds - the training is so different. They always come to me and complain. I try to be friendly to everyone, stay out of cliques and sort out the real problems over a meal.'

As the former concertmaster of the Nice opera, Pieter Schoeman, now co-leader of the London Philharmonic Orchestra (LPO), recognises that musicians from around the world have diverse training but must find ways to work together. 'In France players are very independent and less disciplined than in the UK. Everyone likes to show that they are right, and they can react in a hot-blooded manner. This does not make for team players. In London, orchestral discipline falls completely on the concertmaster. I control the noise level and make sure the conductor feels comfortable, yet still have to let the members know that I am on their side. I am responsible for breaks and overtime: often I am forced to stand up and stop in the middle of a phrase during a rehearsal or recording session.'

How do the sound and style preferences of the concertmaster contribute to the tone of the string section? 'For me, it is all about sound and the way the bow is drawn,' says Bar-Josef. 'When a player auditions I listen for focus in the bow, the vibrato and intonation. Additionally the candidate must really know the excerpts and have good rhythm, but be musically flexible. When it comes down to selection I have one vote just like everyone else.'

Dicterow looks for players who have the qualities of a soloist. 'In New York the strings have a special sound. Our hall favours the brass so we have to work hard. I look for musicians with a gregarious, bold sound.' Braunstein concurs: 'The Berlin Philharmonic is different because everyone plays like a soloist - even the seventh desk. Everyone plays out and never plays it safe. This makes the process of playing together complex and demanding, but we find a way to mix. When the time comes for auditions, the whole orchestra attends; we all get one vote, even the music director.'

Schoeman takes a different view when choosing players: 'The sound of the strings changes because of the sound of the concertmaster. I have been told that we sound different when I am leading. This is because the other players adapt to how I play solos and demonstrate. In auditions we look for players who fit in and will be flexible - those we can form. We would never choose someone who is different - we want team players.'

While performing the duties of ensemble player, the concertmaster is also required to soar above a sea of sound and become a soloist. 'I am one of 50 people playing and suddenly I am exposed,' comments Dicterow. 'This can be more daunting than playing a concerto.' Schoeman has experienced the same challenge: 'One of the biggest difficulties is playing through a work like Tristan und Isolde. You have a big solo for which you must prepare mentally pages before so that you are in the proper state of mind. Meanwhile, you are playing millions of notes. This takes real mental stamina.'

If being an ensemble player, policeman and soloist is not enough, occasionally the concertmaster is required to conduct, sometimes without warning, as Dicterow explains: 'Once we were playing an avant-garde work at the dress rehearsal, with an audience. When they heard the music, people started getting up and leaving the hall. Kurt Masur who is in his 70s, got so irritated that he suddenly jumped off the podium, flounced off the stage and ran to the far doors. Pretending to help escort the patrons out, he said in complete derision: ""Please, may I hold the door for you?"" He abandoned us midstream and we were left to finish the piece without him.'

Several concertmasters reported that the biggest challenge of their job is the amount of repertory they play each week, juggling double rehearsals with several concerts each week and keeping up with bowings, fingerings and arranging divisis. The European system of having several concertmasters seems to give some relief from this pressure. 'We meet between us and try to divide the season so that one of us is always there"" says Braunstein. 'Sometimes two of us play together and on tours we often alternate positions.'

The personnel and complexion of the world's orchestras have greatly changed in the last 30 or 40 years. It is shocking when viewing historic films to see mostly balding heads - not a woman there. Today's orchestras have become more balanced and of the three female concertmasters interviewed none had ever experienced any chauvinism or prejudice. 'We have many women principals,' confirms Bar-Josef. 'If you're good enough to lead the orchestra, you get the job.'

What, then are the qualities a player needs to lead a great orchestra? Dicterow was originally hired as a soloist with the Los Angeles Philharmonic, with no orchestral experience at all. 'Zubin Mehta told me I would learn and he groomed me. Someone with a lot of chamber music experience would fit in well in an orchestra.' Braunstein agrees: 'I do not consider this job any different from the first violin of a string quartet.'

'I learnt a lot from watching Joseph Silverstein, the concertmaster of the Boston Symphony,' says Bar-Joseph. 'He has real leadership and full command. There was no question that everyone watched and followed his bow distribution. They looked and sounded like one.'

'A good concertmaster must possess many, often opposite, qualities: those of soloist and team player,' comments Schoeman. 'You must have a strong musical mind, but contain it to fit into the orchestra and be with the conductor. In a solo you have to have a beautiful sound that carries and shines, but when you play with the section you must not stick out. Many concertmasters begin as soloists, competing and playing recitals. Perhaps looking for stability and less pressure they turn to the orchestra - but you must not lose the qualities of a soloist. In the orchestra you cannot spend months learning a solo. Sometimes I have as little as five days to prepare to record.'

'No one trained me for the human side of the job"" admits Bury of the OAE. 'I used to take on conductors, and looking back I think I'm lucky to have kept my job. There is more to it than just telling people what to do' Now I think people respect me for my concentration and quick thinking and the ability to come in with confidence when we have a dodgy conductor.'

Whatever the challenges, pressures and difficulties' Bar-Josef has learnt an important and universal lesson about her job: 'Do not take a bad mood to work. I smile when we tune and it puts the orchestra in a good mood.'

Read: How to be an effective orchestral section leader

Read: Faking it - the great unmentionable of orchestral playing"