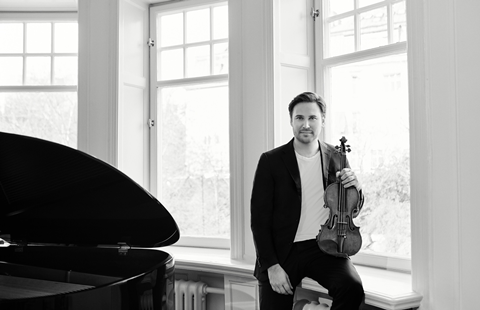 Swedish violinist Christian Svarfvar, who trained at the Stockholm Royal Academy and at the Juilliard School, has followed the usual habit of those lucky enough to have a Stradivari at their disposal: to never let it out of his sight. Despite a busy international career, with all the flying that entails, ‘I have never agreed to put it in any luggage space,’ he told The Strad.

That all changed on 6 July when a rail-replacement coach operated by Swedish national train company SJ refused to accept the violin on board, according to the violinist. The instrument, a 1709 golden period violin, is on loan from the Järnåker Foundation.

‘I was on my way to perform at a concert with pianist Peter Jablonski when the train I was suppose to take in Stockholm was cancelled and replaced with a bus,’ said the violinist. The bus driver insisted that all luggage be placed in the compartment underneath for safety reasons. ‘I began to argue, though I did not at first mention what it was and what it is worth, because I was hoping to avoid it – there were people around,’ he continued. ‘I just explained that it was a valuable thing which I would prefer to have in the bus.’

Failing to get his point across, Svarfvar eventually disclosed the pedigree and likely value of the instrument. The driver, despite recognising the Stradivari name, was unmoved and asked the violinist whether he valued it above human life.

Fearing missing the concert, Svarfvar relented and allowed the precious instrument to be placed in the cargo compartment. He was then shocked to find several empty seats on the bus, all with seatbelts which could have secured the case. ‘Also, I could have had it between my legs. I’ve done that many times before, so I do not understand why that was not possible,’ he said.

SJ’s press officer released a statement expressing regret over Svarfvar’s experience, but emphasised that in such a case the bus rules apply, even if the bus replaces a train, where the rules for transporting instruments are more generous. ‘The driver’s assessment applies,’ said the statement. ‘If it is not safe to have the instrument onboard the bus in case of an accident, the option is there to put it in the luggage compartment, and exceptions can’t be made.’ The press office acknowledged, however, that SJ should provide clearer information on luggage rules and where they apply.

‘I was obviously surprised at how I was treated by the driver and the surrounding staff,’ commented Svarfvar. ‘The lack of understanding and flexibility was really striking. The more coverage it gets the better for all travelling musicians.’