Vibrato in slow motion - on violin and cello 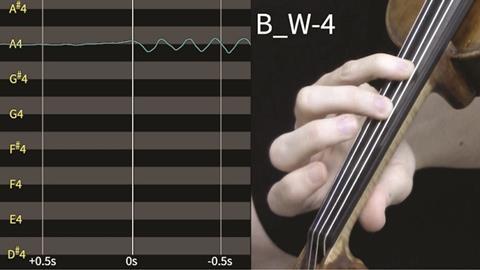 As part of a series of studies on vibrato pitch centre (2004, 2005, 2014), researchers Rebecca MacLeod of the University of North Carolina and John Geringer of Florida State University asked 60 university string players and a former concertmaster of the New York Philharmonic to perform a semibreve (whole note) with two beats non-vibrated, followed by two beats vibrated on first, second, third and fourth fingers.

The frequencies of the non-vibrated and vibrated pitches were analysed and compared. In each case it was found that players vibrated both above and below the intended pitch fairly symmetrically - contrary to the assertion of Ivan Galamian that the frequency of vibrato oscillates from the in-tune pitch and below.

The video above shows the mechanics of a vibrating hand in slow motion - a first finger E on a violin D string. The violinist's vibrato slightly favours the lower or flatter side of the pitch, but this flattening motion is very slight - approximately 2-5 cents (there are 100 cents in a semitone).

Read Rebecca MacLeod and John Geringer's research article on vibrato pitch centre in The Strad's July 2017 issue, out now – download on desktop computer or through The Strad App.