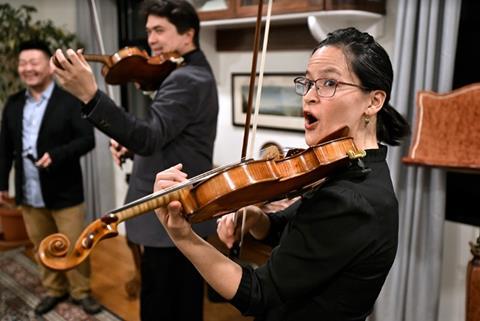 On 15 February, US string ensemble A Far Cry performed a one-off concert at the New England Conservatory’s Jordan Hall in Boston, MA, US. Titled ‘A Stradivari Serenade’ the performance featured all 18 musicians playing on priceless Cremonese instruments taken from the collection of the Boston-based Reuning & Son Violins. The estimated value of all the stringed instruments came to more than $90 million.

A highlight of the concert featured the 18 ‘Criers’ performing their signature piece, Tchaikovsky’s Serenade for Strings op.48, entirely from memory (1:18:28). They also played Elgar’s Introduction and Allegro op.47 (04:59), with the concert punctuated by an instrument showcase, introduced by instrument expert Christopher Reuning on ’What makes a Stradivarius great’, with demonstrations by the Criers (23:33).

The violins included five Stradivaris; three made by Guarneri ‘del Gesù’; two by Nicolò Amati; and one each by Carlo Bergonzi, Gagliano and Guarneri ‘filius Andreae’. The musicians had visited the vault two days prior to the concert, to personally select their instruments.

‘This is the first time I have heard these great classical Italian instruments being performed on stage at the same time,’ said Reuning. ‘For me, it’s a dream come true. We are used to hearing a great Stradivari or Guarneri ‘del Gesù’ being performed in the Brahms Concerto with a symphony, but I’ve never heard a whole ensemble of these instruments in one place.’