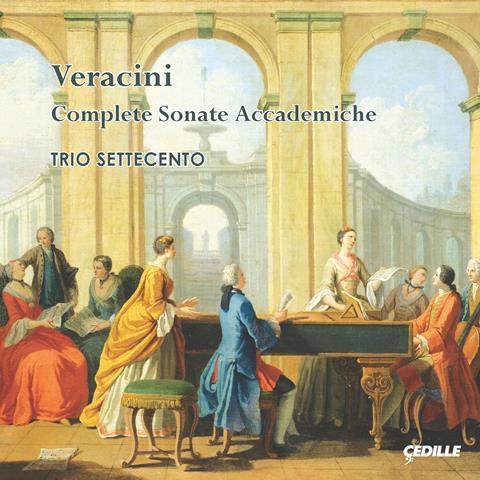 Trio Settecento included a taster of Veracini’s Sonata op.2 no.12 on its Italian Sojourn disc, issued almost a decade ago. The group now offers readings of all twelve sonatas op.2, which essentially pay homage to Corelli’s op.5 sonatas in design and content but comprise such a wide variety of contemporary pan-European influences that all one †¨can expect is the unexpected.

The versatile Rachel Barton Pine has matured immeasurably as a baroque violinist in recent years. Her playing is as intelligent and free-flowingly musical as ever but now seems considerably more authoritative and technically more fluent and secure, assisted doubtless by closer familiarity with her tonally beautiful 1770 Nicola Gagliano. †¨She characterises each movement attentively, whatever its national origins, and adopts an expansive approach that suits this music’s inherent flamboyance, emphasising Veracini’s often surprising harmonic inflections and intricacies of counterpoint, as well as his expressive detail and nuances of bowing and phrasing. Sometimes her virtuosity is riveting, as in the Ciaccona of no.12, and she decorates the violin line imaginatively, as in the Largo of no.3 or the Giga of no.5. Especially remarkable are her addition of Scottish folk-fiddle ornamentation to the Scozzese of no.9 and the folksy character she gives to movements such as the Cottillion of no.4, based on a tune probably extracted from John Gay’s The Beggar’s Opera. There are only occasional concerns about intonation (notably towards the end of the finale of no.6).

Barton Pine is backed by a first-rate continuo team, ever sensitive to Veracini’s directions. Cellist John Mark Rozendaal contributes informative booklet notes, which regrettably include some proofreading errors, and transforms into a treble violist for the concluding two-voice Canone. The recording is clear and resonant, with Rozendaal a touch over-favoured in the balance, particularly in Sonatas nos.7–11.