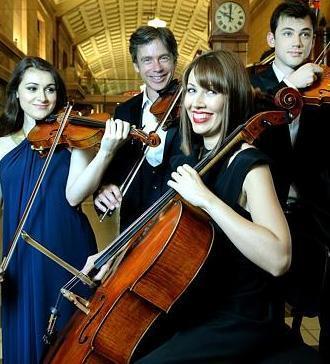 Two members of the Australian String Quartet are to leave the ensemble in 2015, citing ‘irreconcilable differences’. Violinists Kristian Winther and Ioana Tache will see out the remainder of the 2014 season, and new players will join violist Stephen King and cellist Sharon Draper for the quartet’s 30th anniversary season next year, announced ASQ chairman Paul Clitheroe.

‘The ASQ’s most recent performances have been truly exceptional and despite the board’s best efforts to maintain the current line-up, it was advised that the artistic differences within the Quartet were irreconcilable,’ he said.  ‘The ASQ by its nature will see transitions in players from time to time. In managing these, the priority of the Board is to be faithful to the commitment to the many supporters of the organisation over the last 30 years to bring the best of Australian chamber music performance to the country and to the world.’

The ASQ has had a number of different line-ups in recent years – it was only at the beginning of the current 2014 season that Draper and Tache joined the group.

The Adelaide-based ensemble, which receives State and Federal funding, performs on a quartet of Guadagnini string instruments on loan by the Ngeringa Arts Foundation.