Tim Key With a String Quartet. On a Boat. 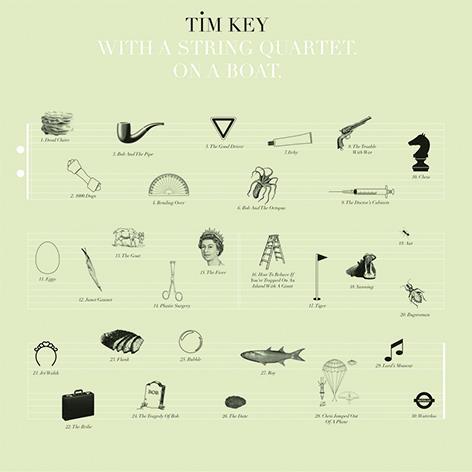 Admittedly, this is not primarily a musical disc. Tim Key is a British comedian who won the 2009 Edinburgh Comedy Award and who has found a cult following in TV shows including Cowards and We Need Answers. His latest project is, as the title would suggest, a recording made on a boat with a string quartet, in which Key recites some of his absurdist poetry and engages in banter with fellow comedian Tom Basden.

But music is at the heart of the humour: the joke, of course, lies in the incongruity between Key’s sometimes pompous, often mundane verse and the supposedly ‘high-art’ status that the quartet brings to the project. What makes the disc humorous from a musical perspective is the breaking of conventions: the quartet players are very much involved, both musically and personally, and musical rules are totally disregarded. Key’s control of the quartet is intentionally inappropriate – he often stops the players mid-phrase and at one point launches an intense Arvo Pärt extract with a ‘Hit it!’ The music ranges from Mozart to Philip Glass, by way of Strauss waltzes, Fauré and popular tunes, all played idiomatically and enthusiastically. It all ends with Key left on his own reciting a surprisingly poignant poem about love and loss.