The Miró Quartet takes on a 'transcendent' project

Playing a priceless combination of Strads and Guarneris from David Fulton’s collection, the Austin-based quartet has recorded and filmed their performance of Schubert’s epic final string quartet — and they’re taking control of their destiny in how they make it available to fans, finds Thomas May 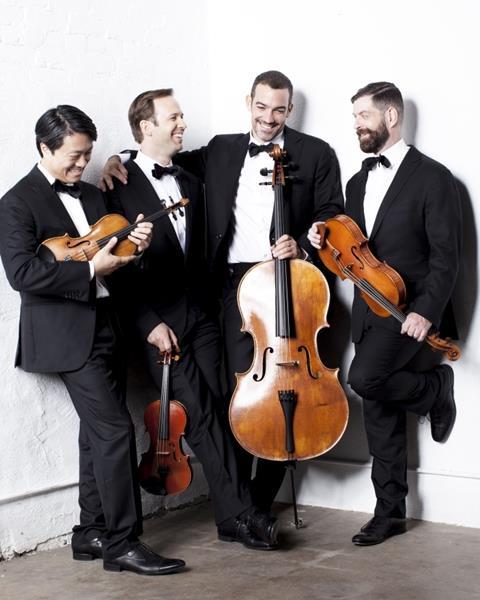 To celebrate its 20th anniversary year, the Miró Quartet has been pursuing some characteristically innovative and ambitious projects. This week the group announced the winner of its Transcendence Education Project: the Fox Chapel Area High School Orchestra in Pittsburgh, Pennsylvania. Entrants had been invited to submit a 30-second video on the topic of ‘musical transcendence’ with prizes including a free masterclass and other chances to interact with the Miró Quartet.

The Miró's education prize is an offshoot of its main anniversary initiative, the online Transcendence project, which involves a new recording of Franz Schubert’s great final String Quartet, no.15 in G major, D. 887, and an accompanying ‘making-of’ film — all financed by the music patron and renowned string instrument collector, David L. Fulton.

Transcendence has been luring chamber music lovers as well as curious neophytes from across five continents ever since the Miró made both the audio and the film available on its website for free, starting in September.

‘This effort has created an even more global market than we had before — from Nairobi to New Zealand,’ says Joshua Gindele, cellist of the Austin, Texas-based ensemble. ‘We wanted to be as generous as possible and make sure people have access to enjoy this fantastic music.’ The model of gaining income through recordings, he adds, has long since become obsolete. ‘That’s not how musicians make their money. So why not be generous?’

This largesse extends to making all five albums from their catalogue (to which they retain the rights) available for download for a token fee of $10. Anyone who does so is encouraged to ‘play it forward’ and send the tracks along to music students or educators to enjoy for free. Along with the growing number of orchestras launching in-house labels, this aspect of the Miró Quartet’s Transcendence project represents musicians’ evolving strategies to carve out a meaningful space in the new ecosystem of digital distribution.

While there’s hardly a dearth of recordings of Schubert’s chamber music, Transcendence is based on an irresistible premise. Gindele and his colleagues — violinists Daniel Ching and William Fedkenheuer and violist John Largess — were invited to make their recording on instruments selected from David Fulton’s private treasury of some of the finest Cremonese instruments in existence.

‘Up till then, David’s collection had never been used by a string quartet — only soloists,’ Gindele remarks. (Fans of James Ehnes will have heard the violinist performing on Fulton’s exquisite ‘ex-Marsick’ Stradivarius of 1715, his preferred instrument.)

After being invited to try out several possibilities from Fulton’s collection of 29 instruments, ‘we ended up going with David’s suggestion for the combination of instruments’. These were instruments Fulton felt would be especially effective for the Schubert: two Stradivaris and two Guarneris.

The Antonio Stradivari 1715 ‘Baron Knoop’ violin, says first violinist Ching, actually ‘shocked’ him with its beauty when he first drew his bow. Dating from the luthier’s golden period, it’s said to have been Stradivari’s favourite violin to play. The other Strad is the 1713 ‘Bass of Spain’ cello (also from his golden period). Gindele describes its sound as the combination ‘of a thunderous bass, like the voice of God, and an amazing upper register. It’s the greatest cello I've ever played - and I’ve been lucky enough to play a lot of the great instruments. I think the cellos are actually Stradivari’s greatest triumph from the golden period. And since the violin and cello exchange so much and even share many lines in the Schubert piece, the two Strads work especially well together’.

Fedkenheuer plays a Peter Guarneri of Mantua violin from 1698 (‘ex. Shapiro’) — the first significant violin Fulton purchased for his collection — while the viola used by Largess is an extremely rare example of a surviving Andrea Guarneri (1676 ‘ex. Landau’). The Peter Guarneri, according to Gindele, was an ideal choice for the second violin because of its ability ‘to make a transition between the brilliance, brightness and ease of the Baron Knoop Strad to the lower voices,’ while ‘the Guarneri viola has more of a tenor than a baritone quality, but with a lot of power and punch’.

Along with the audio recording, Fulton wanted to fund a professional film of the live recording — shot with five cameras — in which the musicians discuss their instruments and offer a brief introduction to the biographical context of the work. ‘The real impetus for the direct digital release was this film,’ says Gindele. ‘We could have put the music out in a traditional manner, but because of this incredible gift David gave us we felt responsible to give back to the public. And it also gives us an opportunity to take control of our destiny in terms of PR for these projects.’

What insights did the experience bring for the Miró? Says Gindele: ‘First of all, a recording gives you things you just don't get in rehearsal. We drill down to what we want to hear and have a much more profound and intimate understanding of a work after we record it. And to have the ears of an engineer and producer gives us a different perspective on the piece and how it comes across in terms of timing, dynamics, balance.’

As for the great Strads and Guarneris on Transcendence: ‘There’s a natural voice to these instruments, along with a depth and complexity and nuance. And that means we can spend more energy focusing on making and interpreting the music and less energy on making the sound, because the instruments are already doing that on their own. We have to do a lot less to make special moments happen or to bring out particular colours. And then when we go back to our own instruments, we learn to approach them in a different way’.