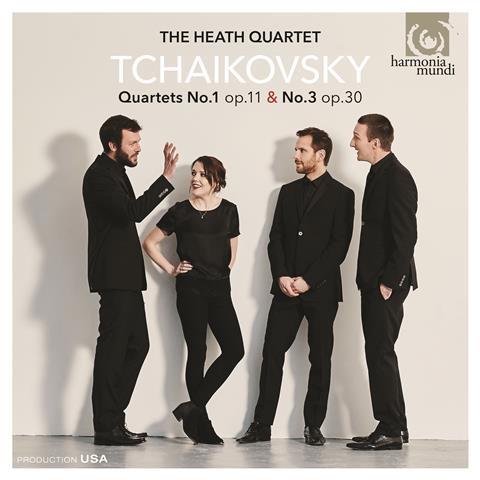 The Heath Quartet jumps in at the deep end in its debut CD for Harmonia Mundi, by selecting the Tchaikovsky quartets – notoriously difficult to bring off, particularly in terms of their texturing. The opening of the First Quartet is a case in point. The material has a vocal quality recalling Russian Orthodox chant and as such needs to breathe – a quality of which I wasn’t convinced in the opening passages of this well-engineered recording.

Generally, despite fine ensemble and technical accuracy, the Heath is somewhat let down by its limited use of vibrato, and the ensuing passagework in this first movement needs equally sophisticated dynamic choreography. In contrast, the players deliver an eloquent account of the Andante cantabile, but the scherzo is rather deliberate in tempo and relatively heavy in articulation.

In the Third Quartet, the ensemble is once again rhythmically tight, yet sometimes the texture lacks transparency, and the quaver triplet figures of the first movement should possibly be more melodically driven. The Allegretto e Scherzando could be far more playful, with the sforzandos almost Beethovenian in their surprise effect. As in the First Quartet, the Heath is at its most convincing in the beautifully hued and melancholic slow movement, even though the underlying harmonic progress is not completely under its skin. If you don’t own a recording of these fascinating quartets, this is a good starting point but not the last word.