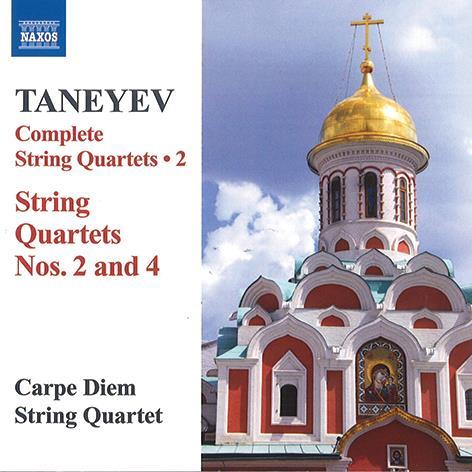 Sergei Taneyev was a musical phenomenon. By the age of ten he was studying piano at the Moscow Conservatoire and just three years later became Tchaikovsky’s composition pupil. He was only 22 when he replaced Tchaikovsky as a professor at the conservatoire, where his pupils included Glière, Rachmaninoff and Scriabin.

The second and fourth string quartets both date from the 1890s, and although the occasional gesture is reminiscent of Tchaikovsky or Borodin, the overriding influence is the young(ish) Brahms of the string sextets (rather than the op.51 quartets). As quartet writing per se, there are few late Romantics who can compete with Taneyev’s enviable fluency, yet for all his consummate skill and the attractiveness of his ideas, he lacks the unmistakable creative profile of a Mussorgsky or a Rimsky-Korsakov.

The previous volume in the Carpe Diem Quartet’s Taneyev survey was nominated in four categories at the 2009 Grammy awards, and little wonder as the players make these unfairly neglected scores sound strikingly eloquent and ripely expressive. The finale of the Second Quartet could perhaps have been more ‘vigorosamente’, the Divertimento of no.4 more fleetly ‘scherzando’, but it is otherwise difficult to imagine this music being handled more sympathetically and persuasively. The recording is both truthful and naturally balanced.