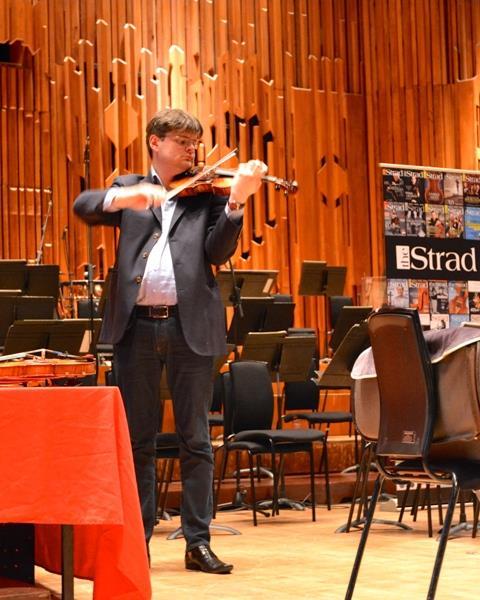 Our first Strad Sunday at the weekend featured an informal blind test of six violins on the Barbican concert stage, each played by London Symphony Orchestra leader Roman Simovic.

Panel chair Sean Bishop of Bishop Instruments and Bows instructed Simovic to play a G major scale followed by the first few bars of the Tchaikovsky Violin Concerto on each of the six instruments – Simovic’s own 1709 Stradivarius, an 1850 Jean-Baptiste Vuillaume, a 1923 Giuseppe Fiorini, a contemporary Del Gesù copy by London-based maker Philip Ihle, an 1835 A.S.P. Bernardel, and a Mirecourt French trade violin c1900, worth around £1,000.

The audience, who were unaware which instrument was which, voted overwhelmingly in preference of the Stradivarius, but in second place was the contemporary instrument by Ihle, who trained in Cremona before working in Switzerland and finally setting up his own shop in London.

Speaking at the event, Simovic complimented the tone of Ihle’s violin, but expressed his preference, in general, for older instruments, saying he believed one can hear ‘the passage of 300 years in the sound’.

Ihle commented: ‘Projection and quality of sound as perceived by the audience are crucial to my clients. I love making violins but only knowing that they perform exceptionally well on stage gives it a meaning for me.’

The results of The Strad’s experiment are in contrast to recent blind tests, conducted by researchers in Paris in 2014 and Indianapolis in 2010, in which soloists showed a marked preference for modern instruments.

Listen to an audio recording of all six instruments being played by Simovic.